Some People Still Use Fork To Eat Pho? 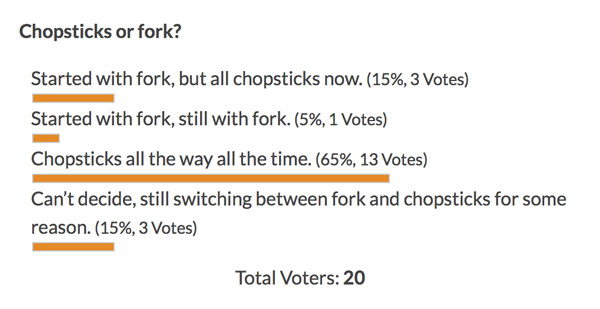 I have this pho poll running for only a couple of weeks. While there are only 20 votes so far (as of this post's published date), I can't resist analyze it. Please chime in in the comments below, and don't forget to cast your vote if you haven't already done so.

The result is obviously not based on extensive data sample and they're pretty much all voluntary. But check out my takeaways:

I thought by now, 42 years after the fall of Saigon and arrival of Vietnamese refugees to Western countries, people would all be using chopsticks to enjoy their pho. Unlike Chinese food where the dishes have been "Americanized" or "Westernized" to accommodate fork and spoon usage, pho has not gone through the same transformation. Pho stays true to what it is in its look, preparation, presentation, taste and how it's eaten. Except for a very few crazy things which I won't mention here, there has been no attempt to change pho for a "Western" taste or dining preference.

I think my data is either tainted by jokesters, or there are actually people demanding a fork with their pho. If the latter is true, it means pho restaurants have to be ready to provide forks to 20% of their customers. No big deal, but still a big deal for businesses who only serve pho with no other Viet dishes on the menu.

So what am I missing? What's your take on why 1/5 of pho eaters still use fork?