Signs That a Pho Restaurant Is in the Process of Failing

Updated 04-02-18. I was recently contacted by a restaurateur to help her pho restaurant. Without taking immediate action to improve business, this pho restaurant will have to close because revenues are not enough to cover expenses.

All the signs are there. Quite clear actually. Even casual observers can probably see what's wrong with this pho restaurant. For various reasons, though, it's never clear to the owner.

Unfortunately, with all my knowledge about pho, about pho business, and about how to properly run a pho restaurant, I couldn't help the owner.

This is the story of a failing pho restaurant that I tried but could not help. The restaurant has lots of potentials and is in decent location, but sadly it's probably not going to make it.

Update: This restaurant closed a few months after this post was published. 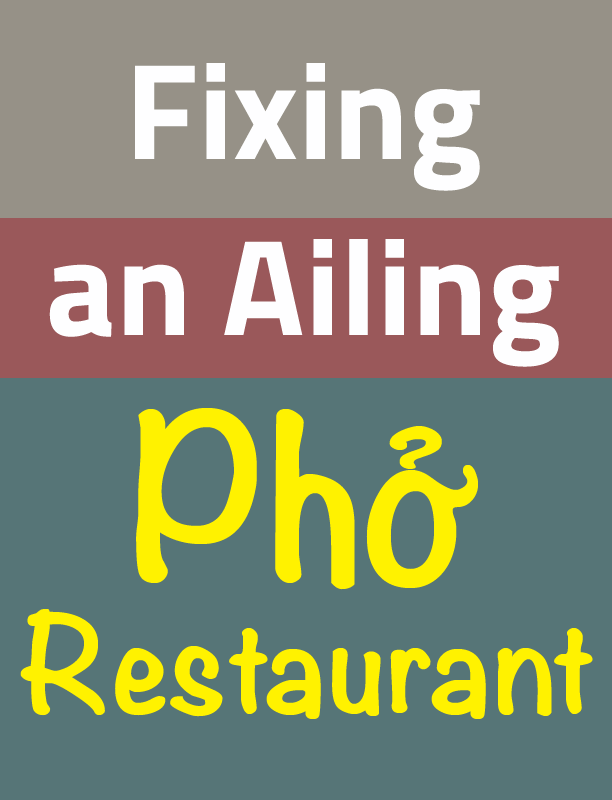 I normally have some idea why a pho restaurant may be failing upon initial examination. However, I don't jump to quick conclusions. I always go through the consultation and analysis process to make sure all information, data and facts are collected and understood. So what are some initial signs of failures? Here are some:

This was just the start. There were many more issues that surfaced upon further examination.

It's not like the owner did not know what was wrong with her restaurant. Of course she had to know. All the symptoms were there, very clear. In any case, I tried to help her see them and take proper action to rectify.

When I dug a little further into the operation, there were other additional reasons for this pho restaurant to not make it, and the owner agreed that immediate action had to be taken to save it.

Treatment For the Illness

I immediately set out to work to help this pho restaurant turn around. First order of business involved fixes in multiple areas, including getting organized; learning the basics of restaurant numbers; understanding the food quality, food cost, customer service and staff training problems; then creating a plan and following through with it. At every step of the way, I worked closely with the owner to help her understand all issues involved, understand how to carry out the fixes and their impact on saving her business.

These are just a few of the things identified in the plan to fix this ailing restaurant. I created a detailed schedule of tasks, serving as the roadmap for the owner to follow. For each area, I spend plenty of time walking her through best practices and detail on how they will help turn the pho restaurant around. The schedule called for 4-5 weeks of preparation and a few days to a week to make any physical changes and re-open.

While there are other additional shortfalls that this pho restaurant displays, after 2 weeks of work, it was clear that there is only one thing that really matters. This is the one thing I've known all along, have initially discussed it with the owner, and have hoped that it would not be the case for this rescue project. I knew that if the owner can solve this one problem, then her pho restaurant may survive.

After 2 weeks of what seemed like smooth sailing toward fixing the restaurant's problems, the owner told me she understood all the reasons for following through with the plan, but insisted that the fixes to be done more quickly and without having to go through the work involved.

What? Quick fixes without having to do the work? Unbelievable!

So that's how far the project went. I could not help this pho restaurant if the owner doesn't really want to make the necessary changes. This is not a case of quick fix, two-day makeover, or simple cosmetic change. The reality is the owner and her restaurant must go through changes at the foundation of the business, and change her way of doing business.

The sad fact is, no pho restaurant ever fails all of a sudden. Either it didn't start out right to begin with, or it's a very gradual slide to the abyss of inconsistent food quality, bad customer reviews, and eventually no revenue. In almost all cases, there's always time to make corrective action if the owner wants to do it. But in the vast majority of cases, you can watch, as if in slow motion, a pho restaurant going down and down, and eventually close.

So there it is. I hope this story helps someone avoid making the same mistakes.

Do you have a story to tell about a failing restaurant? Or maybe a successful restaurant? Share with us in the comments below.