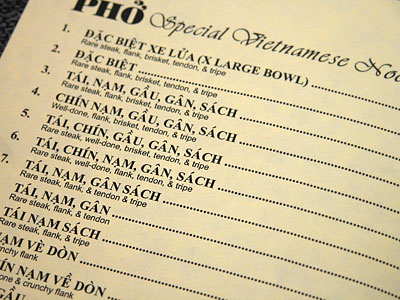 Existing Pho Menu - Too Many Choices

Vietnamese pho is poised for an explosive growth around the world; it already started by some estimates. Pho as a dish should retain its authenticity, taste and tradition, but the pho menu needs to be upgraded if pho stands any chance of really going global and staying global. Pho menu needs a better appeal to a wider audiences outside of the Viet communities.

Too Many Unnecessary Choices

Starting in North Vietnam, Pho Bac or Northern Pho is pretty much available at street vendors as a single dish. Once brought to the South in 1945, pho took on more elaborate form with many options of meat and garnishes added. Pho restaurants in the South present customers with a menu that include all combination and permutation possible of the same pho bowl. Forty five years later the same practice continues, as it migrated with Viet immigrants to all corners of the globe.

Looking at the pho restaurant market, there are really only 2 groups of pho customers: one already knows pho, the other does not.

The fact is, when ordering pho, Vietnamese and many many non-Viet diners do not need to look at the menu. On rare occasions, he/she (more likely a she through my observations) may want something else for that meal, thus he/she wants to look at the pho menu. But for the vast majority of us, we know what we're there for. 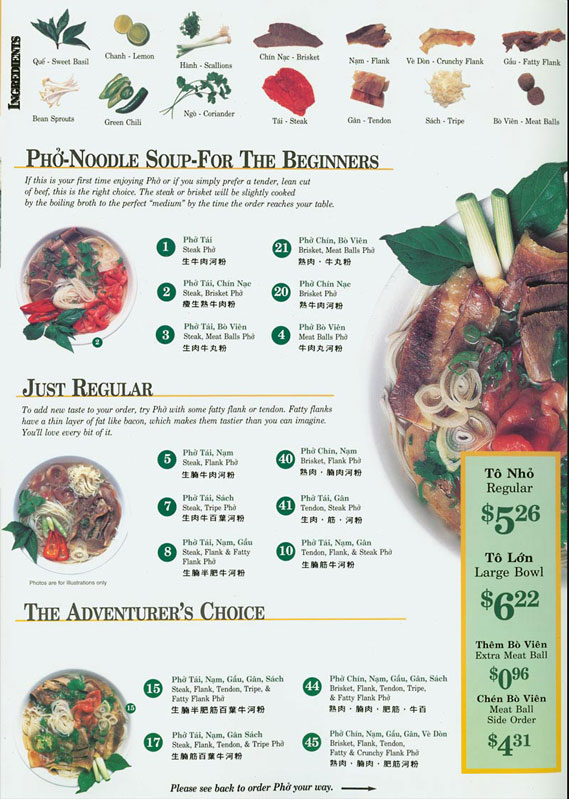 On the other hand, the uninitiated will need some help from a dining companion, from the waiter/waitress, and from the pho menu. But the menu itself represents confusion more than clear and helpful instructions. Typical pho menus may indicate 15, 20 or more options for pho! That's a lot for first-timers to understand and choose from. So in the few occasions that the menu needs to do its job, it's not doing it very well.

The Trouble With Current Pho Menus

So what's the real problem? Considering the non-Viet clientele and those new to pho, let's start with these: 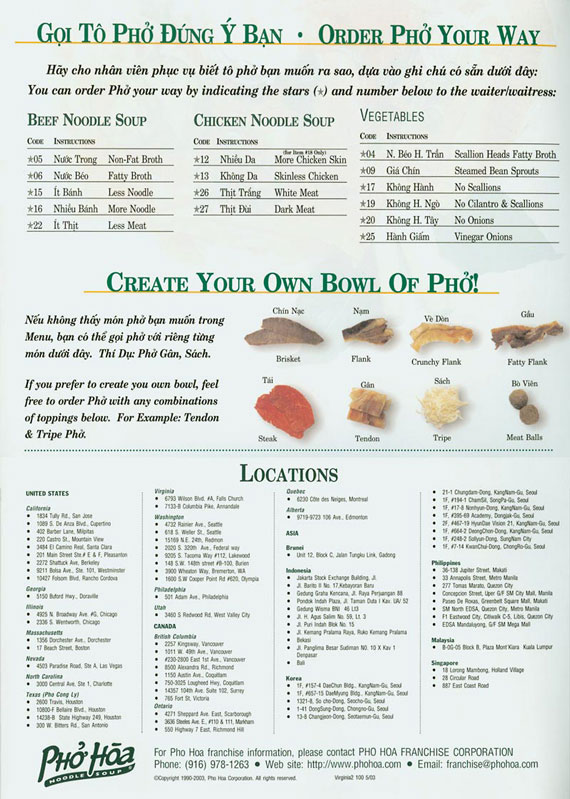 What Is Pho Really?

Why not just tell or show what pho really is? If you really look at it, pho is quite simple to serve and to order, and the menu should reflect this fact. Any bowl of pho (pho bo or pho ga) consistently contains the following:

Once served at the table, diners can further customize with additional garnishes and sauces. That's it. There are not 20 or 25 pho dishes to choose from.

Existing pho menus can benefit from a good facelift. A very attractive design, with clear explanation, and great graphical elements will help take pho menus, and pho itself, mainstream. Content-wise, solution for a better pho menu should consist of the following characteristics:

Several pho restaurants already made attempts to improve their menus, most probably to differentiate from the competition and/or to appeal to more clientele. In doing so they are (deliberately or inadvertently) taking their pho menus in the right direction. For now these are the exception rather than the rule though, and it will take more to go mainstream. 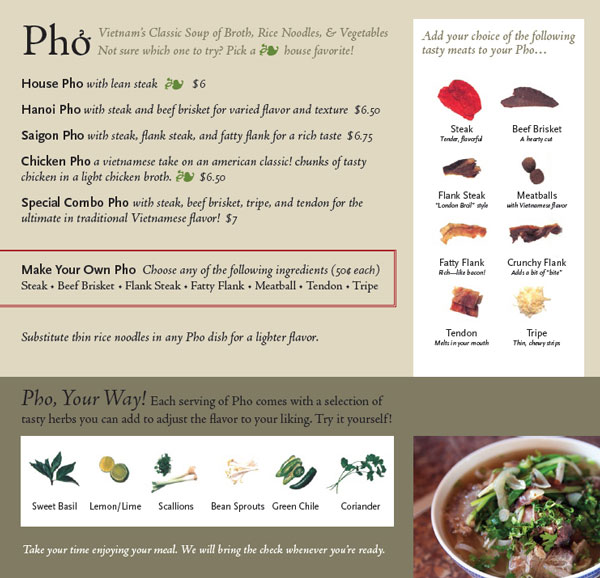 Pho Hoa (the franchise) incorporated some innovative features in their menu, which are very helpful for pho diners. See the graphics above.

To the right is another great example. It's David McGaw's repaired pho menu. It's got many elements that can provide inspiration for improved pho menus. The full write-up on pho menu is no longer online unfortunately, but we can still find the original document Localization Repair for a Favorite Vietnamese Dish via the Wayback Machine.

So pho restaurants, having a large pho menu does not equate to having quality pho - the two are mutually independent. But having clear and easy to understand pho menu will improve your clientele's pho experience, and will definitely attract new business.