Selling Pho Secrets - With A Catch

Updated 05-26-19. I was discussing a new pho restaurant concept with an entrepreneur the other day. Our discussion turned to the topic of whether or not there are pho secrets out there that can be found and bought.

Here's the thing, most people who want to open pho restaurants fall into one of 2 groups. 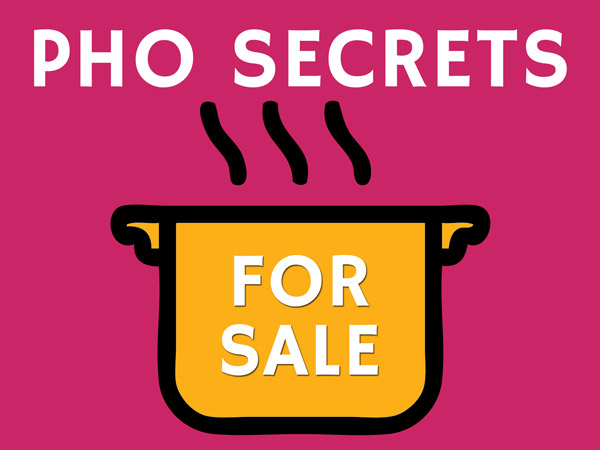 The first group consists of those who know how to make pho at home (or think they know how) and want to try their hands at selling pho in large volume to the public.

The other group consists of those who've never cooked much, and certainly never made pho before, and are searching for secrets to make it big and fast.

The wannabe owner told me a story about a pho cook from another restaurant trying to sell him the secrets of making pho. Here's the proposition which I'll paraphrase:

Hire me and I'll make pho for your new restaurant. It will be great pho and you won't have to worry about anything. I'll take care of all the pho making for you. You just worry about collecting money from your pho sales. And by the way, I will retain all my secrets of making pho and don't have to tell you how I make it.

"WTF!" That's what many experienced owners would say when hearing this, but surprisingly there are many others who will go for it. I've seen it.

I shared with the entrepreneur a few tips and perspectives to help him establish a better foothold before proceeding. Here are a few.

So there you have it. If you aspire to open your own pho restaurant, then look for a good, solid solution; one that gives you the knowledge and ability to make decision and operate for the long term.

Don't go for the quick and easy fixes.

And definitely don't let anyone tell you they'll make pho for you but they retain their "secrets".