Pho Eater Behaviors - What Pho Restaurants Can Learn From These Polls 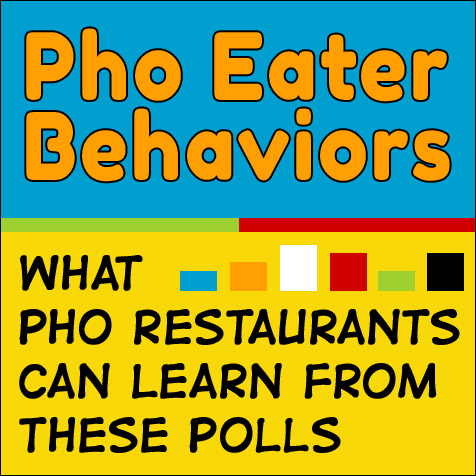 I have a couple of polls running on this site for some time now. It's time to take a closer look.

If you haven't done so, just click on "Vote" link below the poll results to add your 2 cents.

The first poll asks Lovingpho.com readers how often they go out for pho in a typical week. Here are some results at the time of this writing:

Pho addicts: How often do you have pho at pho restaurant per week?

The takeaway if you're a pho restaurant operator

If you're in the restaurant business, it's a well-known fact that repeat customers play an important part to make your business successful. If you're selling pho, then you need to take a look around your dining room over the next few days, few weeks and even few months; preferably you do this every day you're in business. Look at all those people eating your pho and ask yourself the following questions:

This poll asks whether a pho customer has found a favorite pho restaurant that he/she visits all the time. Here are some results at the time of this writing:

Have you found your favorite pho restaurant(s)?

The takeaway if you're a pho restaurant operator

This one is simple to understand but also carries some very important hidden messages. The poll seems to indicate that, for a given market, 80% of pho eaters prefer to frequent a very small numbers of good pho restaurants (1 to 3 or maybe more if you're in a huge metro area like Los Angeles, New York, San Jose, etc.).

So with all the competition to feed an increasingly demanding marketplace, you need to ask yourself the following questions:

Between these two polls, we can draw some important observations and conclusions. To operate a successful pho restaurants, an owner/operator needs to understand the following: