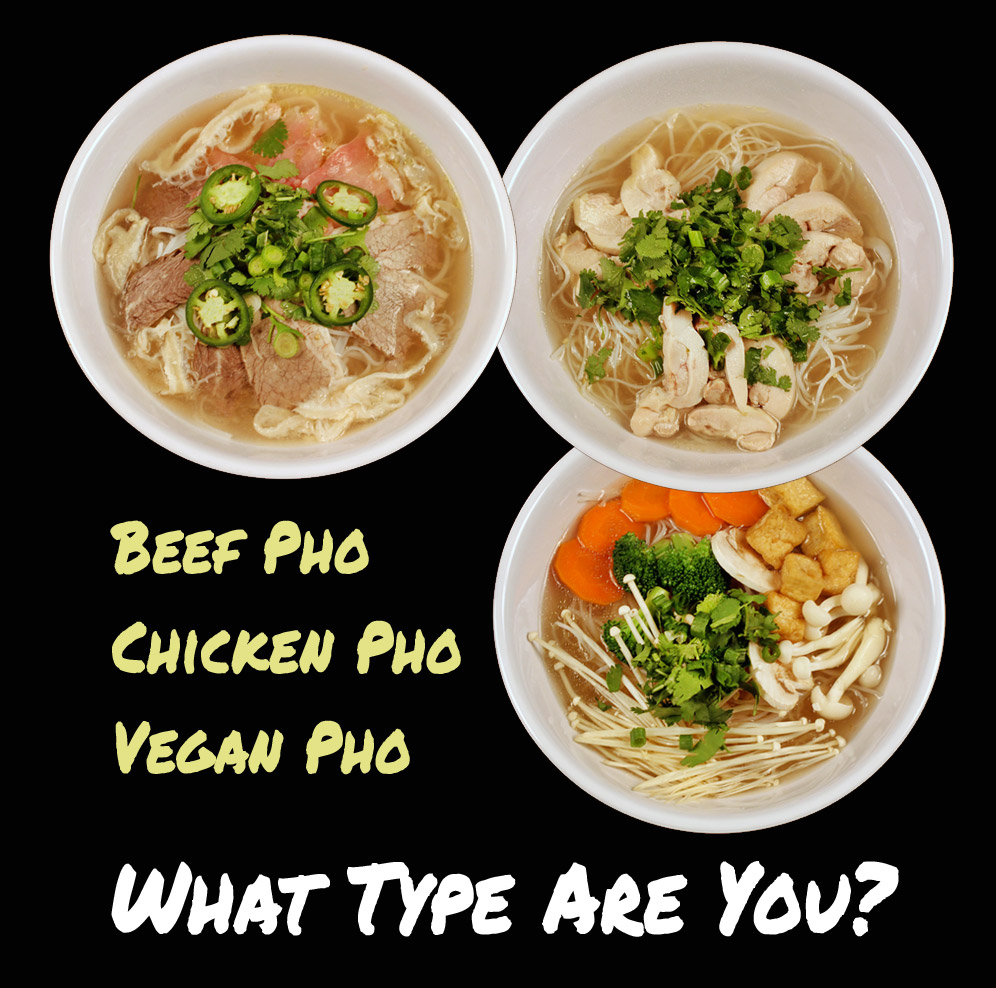 There's no need to debate what type of pho is the most popular. Most of us would say it's beef pho and we know we'd be correct.

The fact is restaurants sell a lot beef pho, and many offer only beef pho. It's popular because it's got everything anyone could possibly want in a bowl of pho.

Beef pho is the epitome of pho. It's the only pho that gives you all the goodness of pho, the fragrance, the taste, and the multitude of beef protein choices that you can customize with. It's the one that fills you up comfortably and make you feel full and happy.

This is why I just don't understand why restaurants don't make an effort to serve better chicken and vegan pho. And don't get me started on seafood pho and other fusion pho created by some pho restaurateurs just to make a few more bucks. It's a topic for another post.

By the way, by vegan pho I mean the real, strict vegetarian goodness type, not the half-way pho using beef or chicken broth with some vegetable topping crap. Real vegan pho must be done with strict vegetarian ingredients AND processes, including preparation and utensils used to prevent cross contamination. That's vegan pho.

Below is a pho poll I have been running to collect and understand how the 3 pho types compare. While the poll is totally voluntary, it does represent a good snapshot of who like what when it comes time to satisfy people's pho fix.

As of this post's published time, beef pho or pho bo is racking in with a whopping 76% popularity, followed by 16% for chicken pho (pho ga) and 12% for vegan pho. What's surprising is vegan pho is not that far behind chicken pho. Given a proper chance, vegan pho can be a strong seller as I alluded to above.

This is a live poll, so the numbers may change a little as new visitors participate. I will update the results from time to time. If you haven’t voted, just click on the Vote link below the Total Voters numbers.

It should be noted that this poll allows more than 1 selection per participant, which results in a total of 104%. But in my opinion 4% is considered small enough to represent some people liking 2 or all 3 types of pho, and the overall results to compare the 3 pho are still valid.

If you haven't taken the poll yourself, I'd love to have your participation. Just click the "Vote" link.

Now I have another poll to look at pho preferences when broken down to men versus women diners. As shown below, if we tally up the beef vs chicken vs vegan again, we get 61% for beef pho, 19% chicken pho and 13% vegan pho, while the other 9% is allocated to other pho or no preferences.

This tells me that, while beef pho is still king, if given the choice, the meat eaters are open to try other types of pho, maybe with different meat or seafoods. On the other hand, the vegan crowd is pretty much set in their ways. They are vegan and only want vegan pho, resulting in pretty much the same numbers of 13% vs. 12%. Isn't that interesting?

Again if you haven't taken this poll, please add your input.

What best describes you and your pho preference.

So what's the bottom line? It is this:

If you're a customer, it's always interesting to see what other pho lovers order when they go to pho restaurants. But if you're a pho restaurateur, it makes a lot of sense to know what your customers like and devise ways to serve them better. This means learning how to collect good data, how to process and interpret them, and finally how to put them to work for you in your pho restaurant. Makes sense right?

Share with us your views in the comments section below.