Home›Pho Chefs & Recipes›What Pho Restaurants Can Learn From This Poll: Have you found your favorite pho restaurant(s)?

What Pho Restaurants Can Learn From This Poll: Have you found your favorite pho restaurant(s)?

I have this running poll asking pho eaters the question:

Have you found your favorite pho restaurant(s)?

If you haven't taken the poll, please click on "Vote" to add your 2 cents.

All 3 answers give us interesting insights. Let's look at one at a time. 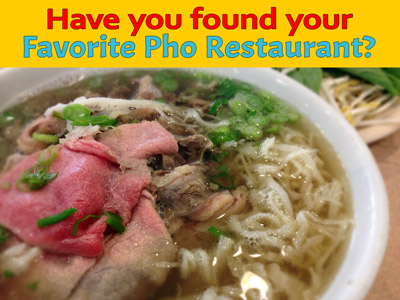 Answer #1: Go to Same 1-3 Pho Restaurants All the Time

As of publication of this post, 80% of respondents say they have 1 to 3 pho restaurants in their town they consider favorites.

This means that if you're a good pho restaurant, then you get the bulk of the customers frequenting your place. No surprise here.

And from the customers point of view, if they find something they like, they will happily patronize those places over and over again. No surprise there either.

In terms of absolute numbers, this can be true in towns with less than 100K - 125K people or much larger metro cities. In areas like San Jose CA or Westminster CA or Chicago IL or Houston TX, there are large number of pho eaters ready to patronize good pho restaurants. In all cases, there are opportunities for more good pho restaurants to be in the game and still thrive.

Regardless of where you are, the point is: you should know your market, know who your customers and competitors are, then position yourself where the opportunity is. If you're in this group, then you're doing great.

If you're not in this group, then the next 2 poll answers can give valuable points to ponder.

For about 5% of respondents, there are 4 to 10 pho restaurants in town that they are willing to give their business to. While 5% is small and somewhat meaningless for small towns, it can be a big deal for large cities.

As a pho restaurateur, you probably wouldn't mind to be (or settle) in this group. What are the benefits of being in this group? Two answers:

On the other hand you also have drawbacks:

One thing is true: If you're in this group, then you face highly competitive conditions for small number of customers, and you do have to deal with very sensitive pricing.

And if you're in this group, the thing to do is to break yourself out and join the group that has pho restaurants on a short list of a large number of customers.

The good thing I can tell you is, if you're already in this "can't decide"group, then making the extra effort to move up to top group can be fairly straightforward with the right effort in the right place. If you can differentiate yourself from this "can't decide" pack, then you can become one of the top pho restaurants to a lot more people, with less competition, more loyal customers and higher profits.

The third answer to the poll carries this concept a little further and represent some exciting possibilities for both existing and new pho restaurant operators.

For the 15% of undecided customers and probably newbies, there are opportunities for pho restaurants to attract and capture their loyalties.

These customers are saying: "I love pho and want to spend money to enjoy good pho experience. Will somebody sell me some please!" These customers haven't found their favorite pho spot, so they continue their search.

Clearly, this is a huge opportunity for any pho restaurant to grab. What does a pho business do knowing this? The answer is obvious: get that customer NOW! But knowing is not enough. Execution to capture these opportunities must also on point.

The fact is, these opportunities present themselves to any given pho restaurant every single day. On any given day, a pho restaurant can have many first-time customers walking through its doors. But the really sad fact is, many pho restaurants still don't provide the best pho quality and service they can give to these prospects. That's bad execution.

For those pho restaurants that care about providing quality and service, this should be a no brainer.

Secrets to Becoming a Top Pho Restaurant in Your Town

I still believe there are plenty of room for good pho restaurants in many cities. In my view, this little poll tells a pho restaurateur some very important clues on how to becoming a top pho restaurant:

In summary, however, I'll just repeat a statement already given above: