Home›featured›How Much Does It Cost To Build And Open A Pho Restaurant?

How Much Does It Cost To Build And Open A Pho Restaurant?

How much does it cost to open a pho restaurant? 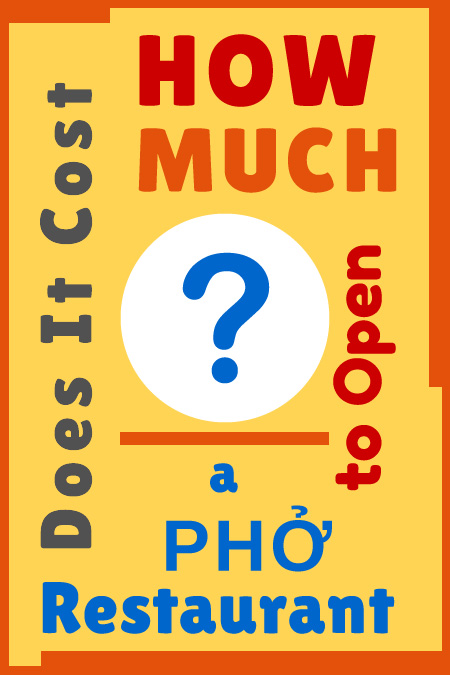 Updated 02-18-19. It's a question aspiring pho restaurateurs often ask me.

For those with just casual curiosity, I can tell you right now and you can skip the rest of this post: It will cost in the neighborhood of $50K (maybe) to more than $500K (depends on what you want).

But it's just like asking: "How much does it cost to custom build a car?" without specifying what you want in the car. Without sufficient detail, all you'll get is a generic ballpark number that's not very useful. Oftentimes a quick answer with no context is a meaningless answer.

For the serious entrepreneurs, please read on for the good stuff.

What's The Cost? Simple Question With Not So Simple Answer

The question is simple. Fact is, the answer is not. But there are ways to get to the cost.

If someone gives you a number as soon as you finish your question (which is essentially what you're looking for by asking just this question), then you should turn around and run the other way. Because that person is lying to you.

At a minimum, the cost to open a pho restaurant depends on a number of factors:

Think About What You Want To do: Some Important Considerations

In order to get a better and more accurate cost-to-open figure, you will want to think a little more about what you want to do. Here are some important considerations to help you develop a better estimate for your new pho restaurant.

So what's the answer? Well, nobody says restaurant business is easy. An aspiring pho restaurateur should spend the proper time developing as clearly as possible what her concept should be, then learn how to integrate everything to make it happen. Cost estimate, recipe development, cooking procedures and operational concept are all important first steps as you ask the question "How much does it cost to open MY pho restaurant?"

Accurate cost estimate to open a pho restaurant rests on the following factors:

There are only two types of restaurateurs who don't need to worry about both items 1. and 2. above.

The first are those who are experienced at what they do or know what they don't know, and spend the time to search for answers to guide their decision and action. Whether they teach themselves or receive guidance from a knowledgeable friend or family member, or a pho restaurant consultant, the net result is they learn to work and know the numbers like the back of their hands, and they learn how to avoid making costly mistakes. And if they do make mistakes, they know how and are willing to find help to fix the mistakes. The problem is, to the untrained eyes, these people are "lucky" and if they can do it, anyone can too.

And that's a dangerous assumption, which leads to the second type of restaurateurs, those who count on pure luck to succeed. They skip one or both of 1. and 2. And when they don't succeed, they chalk it up as another "bad luck" or "market not right" or other excuse. They may as well play roulette with their money in Vegas where they will do much less work and have much more fun losing their money.

In all seriousness, in order to determine the cost of open your pho restaurant, you should do both 1. and 2. above. It's like this:

By working out your costs systematically using a pro forma as a tool, and updating it regularly, and then minimizing mistakes as you go, you can keep your cost as close as possible to your pro forma numbers. This is exactly what you want to do.