Home›featured›Up-Sell Specialist - Would This Work in a Pho Restaurant?

Up-Sell Specialist - Would This Work in a Pho Restaurant?

Updated 09-30-15. A recent article on businessweek.com describes yet another way restaurants will try to get customers to spend more money: up-sell specialist. It's basically a new tool for a restaurant operator's four-wall marketing arsenal. So what are the good and the bad of this up-sell method, and how may it work in a pho restaurant?

Up-selling is nothing new, but employing an up-sell specialist is. Up-selling is a sales technique whereby a restaurant induces the customer to purchase more items, upgrades, or other add-ons than the customer had originally planned to do. It may be something as simple as "would you like fries with that?" or an elaborate presentation of dessert options right after dinner. "Would you like to super size that?" is the classic up-sell campaign. The goal, of course, is to attempt to make more sale per ticket or per customer. Up-selling is in fact a part of four-wall marketing.

Four-wall marketing is marketing to your captive audience inside your restaurant's four walls. You already have people come and buy your food, so why not get the most out of their presence by selling them more? Four-wall marketing ranges from passive, informative wall and table postings to actively persuading or even aggressively asking customers to buy up or buy more.

According to the article, Noodles & Company has been testing and now plans to add free-floating dinner service servers whose job is "to tempt guests to order dessert, beer, wine, and coffee." The server will stop at guests’ tables when they’re nearly done with their meal, ask if they’d like to order anything else, and bring the extra items to the table—no gratuity required. Noodles and Company Chief Executive Kevin Reddy says they expect this to boost same-store sales by 3 percent. This is huge sales boost if they can sustain it. 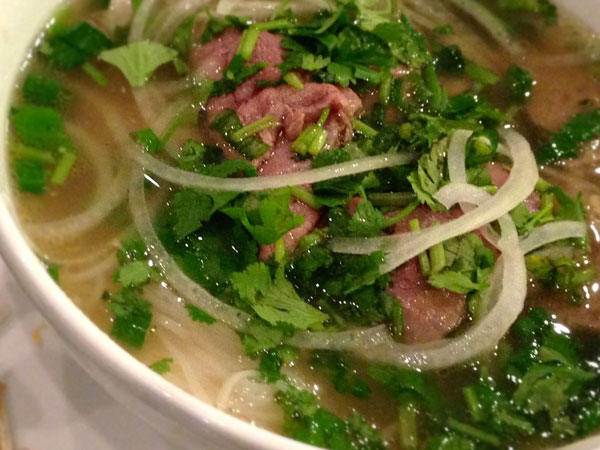 How May an Up-Sell Specialist Work in a Pho Restaurant?

The bottom line is, as a customer of a pho restaurant, I would not look at this "extra service" very positively. From a fast-casual or quick-service restaurant's standpoint, if it does not already fit the restaurant's customer service concept and culture, then I wouldn't bother with such aggressive sales tactic. You'll be alienating and irritating, if not losing outright, your customers. In this case, just go with a more subtle, customer service-oriented, suggestion-based technique, then develop it from there.