Home›featured›Will You Eat Pho With MSG? A Pho Poll Result

Will You Eat Pho With MSG? A Pho Poll Result 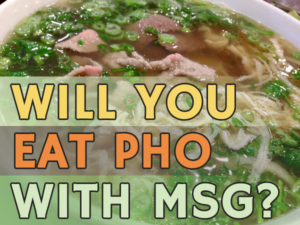 Here's an update on the Pho and MSG poll I have running for a while on the site with some of my assessment. A warm thanks to all readers who took the poll. If you haven't already done so then please join in and take the poll. Just click on the "Vote" link.

The above poll itself is live and changes over time. For this post, let's take a closer look at the results as of August 5, 2017 (snapshot below) to see what pho eaters are telling us about their feelings regarding pho and MSG. 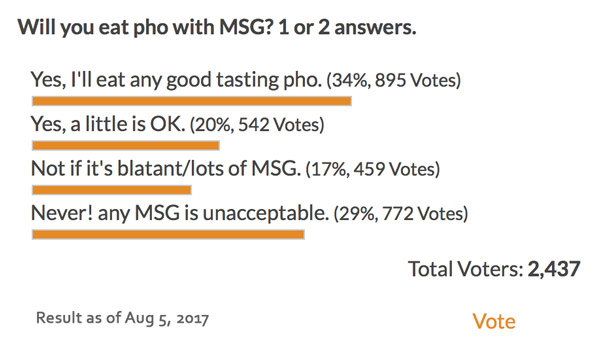 It looks like 54% (34% + 20%) of poll takers are okay with having MSG in their pho. If we stretch this to further include the 17% who say they'll eat pho if MSG use is not blatantly excessive, then we'd have an overwhelming 71% (more than 2/3) who would eat pho that have MSG in it. At the other end of the spectrum, almost 1/3 says they'd never eat pho with MSG.

So here's my take on this.

So do you agree or disagree with my assessment above? Love to hear your feedback on the subject.

If you're a pho restaurant operator, what is your experience on this?

Read my other post on MSG: Vietnamese Pho With No Monosodium Glutamate (MSG)? Sure You Want It That Way?

To find out how I can help you open your own pho restaurant, or improve your existing operation, please use the form on the Pho Restaurant Consultation page.