What Is Real, Authentic Pho?

As I advice others on how to open and operate their own pho restaurants, a common pho question always come up searching for a good answer. Seeing that it can result in much confusion or misunderstanding, I want to put this out to share my views on this.

The question I get very often is: what is real, authentic pho and how do I make it?

First a bit of background. I'm not going to go into the whole history of pho here. For that, you can read about The History and Evolution of Pho. For the purpose of this post, the important event was 1975, the end of the Vietnam war, when large number of refugees left the country to settle mostly in the U.S., Canada, Australia and a few European destinations.

At the time, pho was already regional in Vietnam. There was a Northern pho version and there was a Southern pho version which are essentially Hanoi/Nam Dinh pho style and Saigon pho style, respectively. Of course the 2 styles exist today and thriving. They have the same or similar basic ingredients with some variations in ingredients and cooking method/process depending on the region.

Well, 1975 happened, and almost 30 years later, beginning around 2005, pho gained popularity and became pretty much a global phenomenon. It can be found in all corners of the globe. Many people, especially non-Vietnamese, have an opportunity to taste a wide variety of pho during their travel to different places, and more importantly, a lot more freely in Hanoi and North Vietnam. As a result, pho Hanoi is becoming more known and unavoidably is thrown into the mix and discussion of what is real or authentic pho.

I should point out that, pho should not vary widely from place to to place. Good pho should follow a fairly narrow band that defines pho as pho. Anything outside of that band, we already have a name for it, as exemplified by the excellent tasting and awesome hủ tiếu, which does allow for wide regional variations.

So, a few people from mainland China and elsewhere asked me that they want to make authentic pho like being served in California, not in Hanoi or Saigon. A few others mentioned that they like to serve the more "authentic" version with jalapeño as used in North America as opposed to the Thai chili pepper they have in their country.

Wow, what a mess of confusion, wouldn't you say?

I always take the time to explain the difference and what is what and where is why. The risk of being a culinary dish becoming well-known globally in such a short explosive time is to create a mess of confusion. Today people can get pho almost anywhere and some reality is lost not just in the thick of it, but also from a few liberal local pho restaurateurs claiming they serve authentic pho. For those who live near a Vietnamese community in the U.S., Canada, Australia or Europe, or were introduced to pho in these places, it is the Vietnamese pho they know as the real pho, and everything else is compared to it.

The answer of what is real, authentic pho is even more elusive.

Is Global Pho Vietnamese Food Anymore? Well... Yes and No

As in many things in life, we develop personal preferences, habits, or even biases, for a particular food we grow up with. Pho is no exception, even for young Americans these days.

Due to events in 1975, a period of more than 39 years as of 2014, we now have pho outside of Vietnam that has really morphed into something based more on available regional ingredients and taste. For example, the pho you find in North America today originated from almost 100% of the Saigon style brought over to the states from 1975 and after. Over 40 years, it continues to change to fit customer demands and new ingredients; witness the reduced fat and no-MSG use in the broth, the addition of seafood pho, the expansion of vegan pho, and use of wagyu and even Kobe beef. For many pho lovers, there's a real difference in pho in San Jose CA compared to pho served in Little Saigon down in SoCal, and there are fans who will pledge allegiance to either.

During this same 40-year time period, pho within Vietnam continues on its own development path with new younger generation of pho operators, with changing local tastes, and with foreign visitors. Plus there are expatriates coming back to open pho businesses, taking with them Western influences in ingredients and cooking methods. Add to all of this the Northern style and Saigon style pho that are intrinsic to each region in Vietnam, and you can see we have pho going in many directions.

Food and tastes change over time. Pho is no exception. 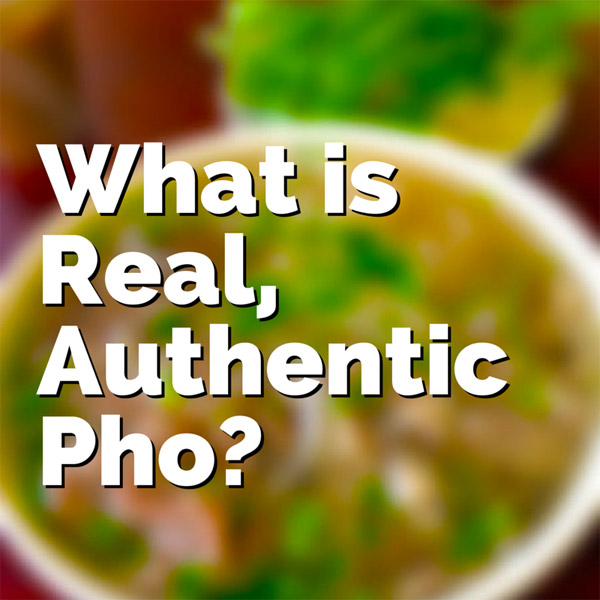 There is no definitive answer to the question, and I think I'll leave the academic aspect of this debate to the pho scholars, if they exist at all. For me, I have the following thoughts:

So what do you think? What's your view of real, authentic pho? Please share your opinion in the comments below.