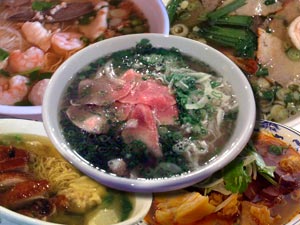 Something interesting came out of my chat with Corrine Trang about pho and other Asian noodles. Nothing is really earth shattering here, and for pho fans, this is like preaching to the choir. But through these 5 simple questions I believe we captured the essence of Vietnamese pho, so it's worth a mention in a separate post.

I asked Corinne a series of questions comparing pho to other Asian noodles, calling it the "ultimate noodle face-off." And she should know, because she herself wrote the book about noodles, Noodles Every Day. Let's face it, Vietnamese pho is a late comer to Americans' Asian culinary awareness. Pho certainly came to America after the Chinese, Japanese and Korean noodles. But pho is getting its fair share of fan buzz and definitely building more followers all the time.

So here’s the pho noodle face-off results, pho against other noodle dishes according to Corinne Trang. The scale is from 1 to 10, 10 being the highest level (best, most complex, etc.)

If I have to rate these myself, I would give "Difficulty to make pho" a 4/10 and "Degree of difficulty to serve pho" a 2 or 3, just because I would take into account the fact that many Americans didn't grow up with pho, and therefore are unfamiliar with how it's made and served from inside a kitchen. But I think my own viewpoints do not disagree with Corinne Trang's numbers.

The take-away: Pho is great tasting, not difficult to prepare (especially with the right pho recipes,) super easy to serve, does not require an excessive amount of ingredients, and is very popular among non-Asians. If you also consider that pho can be enjoyed at any time of the day, then you have the perfect combination of goodness in pho.

For me though, there's a missing link: I'm still working on getting reliable calories counts for pho. So please let me know if you have a good source.

Read the details on the original and complete post with Corinne Trang on Vietnamese Pho, Noodles Every Day, and Life.