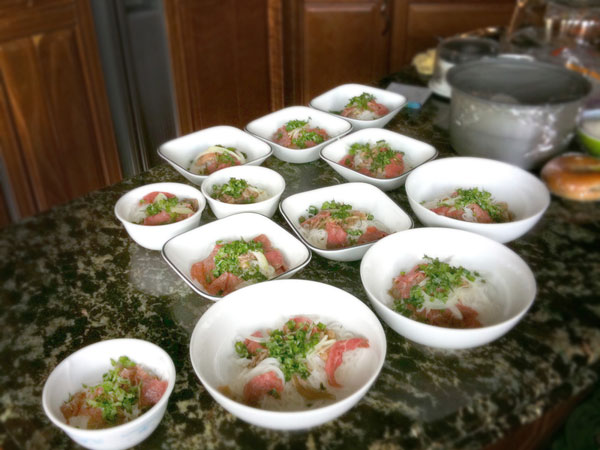 Making pho at home is easy!

Making Vietnamese pho at home. It's not as daunting as you might think. Making pho is very easy, actually.

LovingPho.com visitor J-DuB left a message the other day saying, among other interesting points he (I assume it's a he) was making, that

Personally, I hope that people DO give a shot to making Pho at home, at least ONCE. The making of which helps to build good fundamental cooking skills and maybe people will be more “picky?” of what they eat.

Lovely statement! I couldn't have said it better myself. And obviously I wholeheartedly agree.

I should preface the rest of this post with the following. I know there are many Vietnamese making great pho at home for friends and family, and I'm not talking about them here. But if you are a non-Viet person who wants to make pho at home, then this post is for you. So here we go.

I've written plenty about Vietnamese pho broth and about pho recipes. People should know that making pho at home is very easy especially if you live in the U.S. or metro areas where decent Asian supermarkets exist. When you can't find Asian/Viet food ingredients, is when you will have to resort to substitute ingredients and end up with “fusion” pho; which is totally understandable and ok with me if you just want to get your pho fix temporarily. In fact this was exactly what my family and many Viet families had to do circa 1975 -1980 in the U.S. when first arriving in the U.S. and our only choices were Chinese markets in cities a hundred miles from where we lived. My point here is, when you make pho at home, for various reasons, you run the risk of not getting the authenticity that you may want, as compared to eating out at a pho shop, AND, you also run the risk of actually liking your fusion pho!

In Vietnam, hardly anyone makes pho at home. Only restaurants and pho shops make pho. Pho is best made in very large quantities to serve large number of people, and is not normally made to personal portions at a time. The scaling down of a pho recipe for a few people to eat really does not work very well, or at least is not very practical. 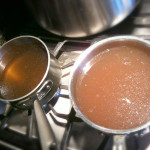 In the U.S. nowadays, convenience, available technology, abundance of ingredients, and higher income levels are all enabling factors allowing people to make pho at home and even experiment with it. Regardless, the way to judge how well made a pho is, is the mass population who enjoy them at pho shops that produce pho in large quantities. Good pho shops will survive and the mediocre ones will vanish, while the so-so will just linger. Generally, this is how good foods become good foods, and it is the measuring stick for your homemade pho. I know, I know, you are not out to make pho for the rest of your neighborhood block or open a pho shop, but realizing the above will give a much better perspective when you make your own pho.

By the way, my friend and founder Brian Nguyen at Quoc Viet Foods has the goal of helping people make pho at home, and he has turned it into a successful business. His approach is somewhat different, where he provides good quality, pre-made pho broth bases to help those too impatient, lacking experience and ingredients, or less knowledgeable to make pho from scratch. Unlike other soup bases on the market, Brian’s stuff is high quality and gives authentic flavors. Another beautiful part of his concept is he literally takes the ingredient availability factor out of the equation and provides pretty much everything in one package. This ensures all important flavors are there even if one cannot find the right ingredients and spices in his/her locality. Anyway, it’s a another way to make pho yourself at home.

Finally, a quick tip for the newbies who want to make pho at home: Make sure you parboil or blanch your bones and meats before the actual making of the broth. Blanching the bones and meats, together with subsequent simmering at low temperature over many hours, will ensure that you have a clear and good quality pho broth. Blanching is needed to remove impurities, soft tissues and blood on the outside of the bones and meats, all of which don’t contribute any flavor and do make the broth very dirty in both look and taste.

So if you decided to make pho yourself, just know that your first attempt will be ok, and your subsequent pho pots after that will be pretty good. Then, the good stuff will start to happen as you know how to adjust to your personal tastes while keeping your pho close to being acceptable to the mass and not just to your friends and family. Happy pho making!