Culantro in Pho - An Herb in a League of Its Own

Culantro is relatively unknown in the United States, and it is often mistaken for its cousin cilantro, another herb often found in a bowl of pho. However, for all their similarities, culantro and cilantro are two entirely different herbs.

What is culantro and just how different is it from cilantro?  How important is culantro to a bowl of pho? Let's dig a little deeper.

So What Is Culantro? 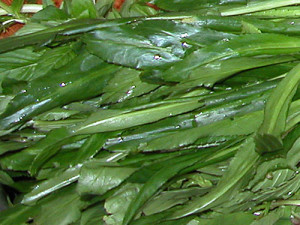 Culantro is actually the Spanish name of an herb in the parsley family that bears the scientific name Eryngium foetidum and has long leaves edged with spines. This herb has many other names, such as: fitweed, saw leaf, sawtooth, recao, Mexican coriander, long coriander, serrated coriander and shado beni, among many others. In Vietnam, culantro is known as ngo gai (ngò gai) or thorny coriander.

The culantro plant often grows as a small plant in roseate formation, and its leaves are elongated, growing from between four to eight inches long. The plant does not thrive in frost or under direct sunlight, although it is possible to find wild culantro growing in open, sunlit areas.

Culantro is actually a native plant of Central America and the Caribbean Islands. Colonization and trading are largely responsible for introducing culantro to the rest of the world, particularly to India and Southeast Asia. However, as mentioned above, culantro is practically unknown in the United States, where it is often mistaken for cilantro.

The reason why culantro is often mistaken for cilantro is because they share similar smell and taste to the uninitiated. Just like cilantro, culantro has a pungent odor that can be reminiscent of crushed bedbugs. Some people are fine with such a smell, but some people can barely stand it. In addition to the smell, both culantro and cilantro have a bitter, soapy taste, although this flavor is stronger in culantro.

But that is where the similarities end. Although they both belong to the parsley family, cilantro has smaller leaves than culantro. Cilantro leaves are also lacy rather than thorny as in the case of culantro.

The Role of Culantro in Pho 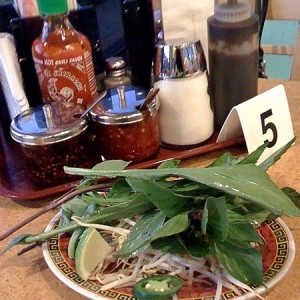 Culantro is an optional garnish in Vietnamese pho, along with the bean sprouts, lime wedges, chopped Asian chili and Thai basil. When you eat a bowl of pho, it is up to you to put culantro in your bowl or not. Some people actually choose not to add the herb in their pho because the smell can be too strong and the taste too bitter.

The herb nonetheless helps balances out the flavors in pho. Vietnamese cooking is highly influenced by Chinese cuisine, and among the principles followed in Chinese cuisine that the Vietnamese themselves have adopted is the principle of balance. In this principle, the five flavors of food - salty, sour, sweet, bitter and spicy - should be present in each dish. But these flavors should not compete with one another; instead, they should exist harmoniously and lend to complex layers of taste.

Culantro literally acts out a bitter role in pho. However, there is already a bitter element in every bowl of pho as provided by the chopped cilantro/scallion mix sprinkled over the noodle-and-meat assembly in the bowl. But because the cilantro and scallion are normally already cooked by the scalding broth by the time the bowl of pho is served at the table, Culantro then plays the role of the fresh and raw bitterness as chosen by the diner. It is meant to enhance the bitter layer in the flavor of pho and to give the broth a stronger zing, if that is what the diner wants in his or her pho.

Many people just tear the long culantro leaves into pieces of about one to two inches long and drop them directly into their bowl before taking the first bite (or slurp). This in effect gives them cooked culantro as they finish the meal. Others add them a few pieces at a time as they progress so that they get the maximum bitterness, freshness and crunchiness from the herb in every bite. For maximum effect, many pho connoisseurs like to tear culantro (and basil too) into smaller pieces (maybe 1/2 inch size) and add them as they eat their pho.

We take culantro (ngo gai) so seriously that our point system for rating pho at restaurants and shops gives ngo gai extra points for freshness. See the post "The Importance of Garnishes for Pho."

Aside from being a garnish or an ingredient in a dish, culantro also has medicinal properties. It is sometimes eaten to stimulate appetite in a diner and to help the diner digest his or her food, a trait that culantro shares with cilantro. The leaves of the culantro can also be boiled and made into tea that can help treat flu, pneumonia, diarrhea, fever and vomiting. Sometimes, the herb is also administered to cure convulsions in children, which is why it is called fitweed in some countries.

The herb is also healthy to eat on its own, even if you are not sick. Culantro has a high content of calcium, beta-carotene, riboflavin and iron - nutrients that the body needs to stay fit and to stave off disease. 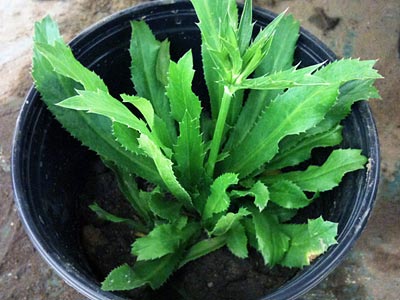 It is actually easy to cultivate culantro in a garden. All you need to do is to have a plot of well-drained soil and protected from direct sunlight. You can also grow culantro in pots indoors.

When you grow culantro in a garden, the best time to do your planting is during springtime, when the frost of winter has already melted down. This herb is a tropical plant and it hates the cold. Each plant must be planted six inches apart from each other.

It is also typical for culantro to shoot out and grow flowers come summer because the heat triggers its flowering. This is why it is so important to grow it in the shade - to keep the plant from flowering for as long as possible. Mulching can also extend the plant's life and prevent it from growing flowers. Once culantro has grown flowers, the leaves become unfit to eat and the plant eventually dies.

Harvesting culantro a few leaves at a time also helps prolong the life of the plant. When you harvest the leaves of culantro, it is important for you to use clean gardening scissors to prevent any damage to the plant.

When your plant does succeed in bolting - that is, developing flowers and seeds - just let nature take her course. Gather the seeds of your culantro plant so you could use them for replanting your herbs and replacing your dead culantro plants.

The one advantage of culantro over cilantro is that culantro can be stored without losing a lot of its flavor. Cilantro, on the other hand, is best used fresh. To store and preserve culantro, the leaves should be chopped and mixed with olive oil. The mixture should then be placed in a container and stored in the freezer. It will last there awhile.

Being an unknown herb in the United States, culantro is often mistaken for cilantro. It is also not as vital as cilantro as an ingredient in a bowl of pho, and putting culantro in pho is left to the tastes of the diner. But even though the identity of culantro is sometimes lost to cilantro, it can nonetheless has qualities that make it stand out on its own.

Many pho shops in the U.S. (and I imagine other places outside of Vietnam as well) do not offer culantro on the garnish plate all the time. In the U.S. culantro is not always cheap and easy to find, thus it's an optional item, and pho diners don't normally make a fuss about the missing culantro. Of course if you're in South Vietnam eating pho, then it is expected that a large mound of culantro on a huge plate be served for you.