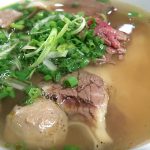 Can someone clarify what the two ingredients "vè dòn" and "gầu" are I see on some pho menus? What kind of beef meat/cut are they? Thanks.

For those not familiar, on menus in many pho restaurants, there are flank (nạm), crunchy flank/beef/whatever (vè dòn), and fatty brisket (gầu) offered as protein toppings. Both flank types come from basically the same flank steak, with the difference being:

- Well-done flank (nạm) is the trimmed version, and

- The fatty brisket (gầu) is either the whole brisket untrimmed or just the point (front) of the brisket. Here's a video showing brisket trimming. It's for BBQ but so what, we all love BBQ right?

The flank steak piece itself has a silver layer/membrane on one side that is trimmed off (along with some fat) for North American consumption. For pho, though, we Viet people leave this on to get the vè dòn. Properly cooked and sliced, it gives a chewy and crunchy texture in addition to the awesome flank beef taste.

If you encounter a pho restaurant in North America that is way outside of a concentrated Asian/Viet community, you're likely NOT to find vè dòn on the menu. This is because these restaurants can only get supplies from American suppliers (like a Sysco) who only carry the trimmed flank for American consumption.

@chuynh Thanks so much Cuong. Very clear and helpful. It seems pho can use pretty much any variety of beef parts, and many of them looks/sounds strange/foreign to Americans because they're just not a part of what Americans eat every day. But in fact these are just parts of the cow.

@zoozoopho6 I think as long as you have very good pho broth, you can use various beef cuts as toppings and still have excellent pho experience. It may not be what others consider authentic pho, but it's your pho while retaining much of what makes pho what it is.