Updated 08-20-14. In Vietnamese pho, you are likely to find chopped cilantro blanched by the broth in your bowl. Many pho recipes that you will find either in Asian cookbooks or on the Internet also recommend using cilantro, chopping it finely and sprinkling it on the noodle-and-meat assembly before the broth is ladled over it. It is very unusually to find pho bowls in restaurants or recipes that skip on cilantro. It’s always there, giving us the flavor that we sometime take for granted.

Given all that, what is cilantro and just how important is its inclusion in Vietnamese pho?

What Is Cilantro (rau ngò)? 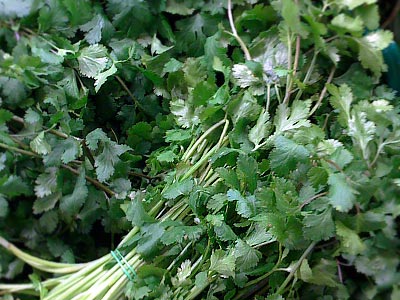 Cilantro actually refers to the leaves of the coriander plant. When you encounter the terms “fresh coriander” or “coriander leaves,” these terms actually refer to cilantro. It can also be called Chinese parsley or Indian parsley. Among the Vietnamese, cilantro is called ngo.

The coriander plant, which botanists call Coriandrum sativum, belongs to the parsley family. In fact, cilantro is often mistaken for Italian parsley, and these two plants are indeed related. The coriander plant is an annual-growing herb, and the plant can grow up to 20 inches in height. The shape of the leaves vary; the leaves at the base of the plant appear lobed while the ones near the top and on the flowering stems are slender and lacy. Coriander can bear white or pale pink flowers, and coriander seeds are also widely used in cooking.

It should be noted that although cilantro and coriander seeds both come from the same plant, they are not interchangeable when it comes to using them for cooking. Cilantro leaves can be very pungent, and some find it bitter to the taste. In fact, a lot of people, particularly Europeans, are not able to stand the smell of cilantro because it is akin to that of crushed bedbugs. Coriander seeds, on the other hand, are pleasant to the nose and have a warm, citrusy flavor. For North Americans, cilantro reminds many diners of Mexican foods, particularly the popular Mexican salsa for dipping. 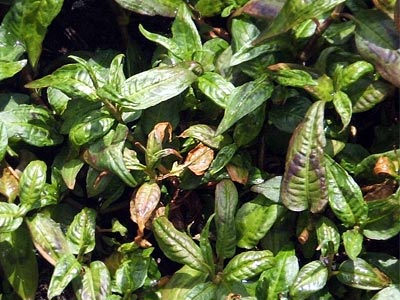 Although cilantro is a common ingredient in Viet and other Asian dishes, people who are not familiar with the plant often mistake Vietnamese coriander and long coriander for cilantro. These three herbs are essentially different even though they are all called coriander plants. Vietnamese coriander (rau răm) is what the westerners call the laksa plant. They also call the plant Vietnamese mint although the plant itself is not even closely related to the mint plant. 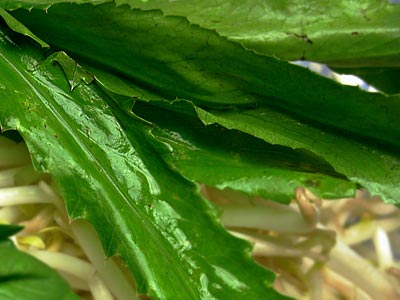 Long coriander, on the other hand, is also known as saw leaf herb or culantro (ngò gai.) It also belongs to the parsley family, just like cilantro. And just like cilantro, long coriander/culantro can be found as a garnish in pho rather than a main source of flavor during the cooking process. Long coriander has an odor similar to cilantro, but the taste is much stronger. Those who love pho are familiar with its long and thorny leaves.

The History of Cilantro

Cilantro is said to be the oldest herb to be used by man. There were evidences of coriander being cultivated during Neolithic times. Ancient Egyptians are known to grow and use coriander, and there is a reference to coriander in the Old Testament of the Bible. The coriander plant is native to the middle-eastern regions of Asia and in Southeastern Europe. Through trading and migration, the plant made its way to China and then to Southeast Asia, where it was used in salads, rolls and soup noodle dishes like pho. The Spaniards who came to Asia brought the coriander plant to Mexico, where cilantro became a vital ingredient in salsa and other Mexican dishes. From Mexico, the use of cilantro spread to the western and southwestern areas of the United States.

The Role of Cilantro in Pho 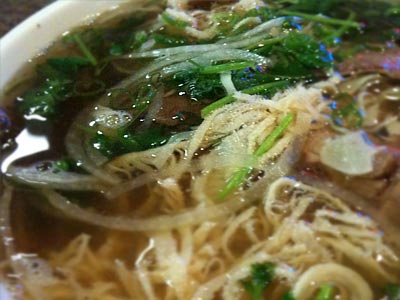 There are two major influences in Asian cuisine, and they are those of India and China. China’s influence has strongly marked Viet cuisine (Vietnam was under Chinese rule for a thousand years,) and among the Chinese cooking principles adopted by the Vietnamese is the principle of balance. This principle states that all the five tastes – salty, sour, spicy, sweet and bitter – should be present and existing in perfect harmony with each other in every dish.

Cilantro is known for its somewhat bitter taste. Some people have even gone to the extent to describe the taste of cilantro as soapy and have made a point of avoiding eating it. But it can nonetheless be said that cilantro provides the bitter element in a bowl ofpho. For me and many Viet, cilantro gives a very nice, pleasant fragrance. The one thing about cilantro is that it is best eaten fresh. When it is cooked or when it is left exposed for a long time, it loses its flavor. Thus, when preparing a bowl of pho, chopped cilantro is usually the last ingredient to be put in the bowl assembly, sprinkled over the noodles and the meat. The hot broth is then poured over it, and the bowl is served immediately.

The Health Benefits of Cilantro

For all its bitterness, cilantro is actually a very healthy herb to eat. It is rich in vitamins, minerals and other nutrients, namely: iron, potassium, calcium, folate, lutein, beta-carotene and vitamins A, B6, B12, C, E and K. Cilantro also has a number of desirable medicinal qualities. It is quite well-known for helping to stimulate the appetite and to secrete gastric fluids that digest food. The herb can also aid in lowering bad cholesterol levels as well as blood sugar levels in the body. It also has the ability to cleanse the blood and to fight infection. You are very likely to find cilantro in the majority of Viet dishes. Whatever you order at a restaurant, you'll probably have cilantro with it. 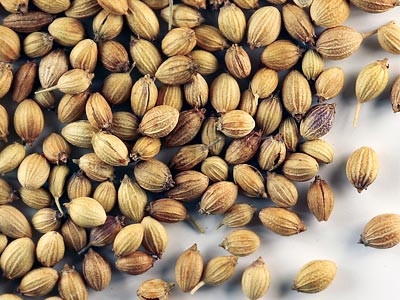 The coriander plant is an annual herb, meaning it can grow and flourish any time of the year. It can also grow indoors and outdoors as long as it is not exposed directly to sunlight, especially during the hottest hours of the day. The plant also grows quickly and you want to replant every six weeks for a steady supply of these herbs in the kitchen.

In order to plant coriander, its seeds must first be prepared. The husks are cracked slightly and the seeds are soaked in water for 48 hours. The seeds are then planted in a pot or in a bed at around three to four inches apart from each other and covered with a layer of soil about a quarter of an inch thick. If the coriander seeds are planted indoors before transplanting to a garden outdoors, the transplanting must be done when the plant has grown two inches tall. Once the transplanting is completed, the watering must be done constantly.

When the coriander plant begins to bolt, meaning to produce flowers and seeds, its leaves cannot be eaten anymore. Cilantro, the leaves, must be harvested once every week to make the plant last longer and to prevent bolting temporarily.

When harvesting cilantro, a few leaves must be left on the stem of the plant so that the plant can continue feeding itself. Only clean and sharp planting scissors must be used to harvest cilantro. Once the coriander plant has bolted, the seeds can be gathered for replanting.

There you have it. The lowly cilantro in fact has a long history of its own. Cilantro never takes the center stage, but you can't have pho without it.