Pho Restaurants in the United States - Pho on the Move

Updated 09-22-09. Here are some stats on Vietnamese pho restaurants in the U.S. - part of a market analysis project I'm working on. The results are still preliminary but worth sharing. I had many sources, but the data presented here came from PhoFever.com's own Pho Restaurant Directory. Thanks to Tom Nguyen of PhoFever.com for keeping up the database. I'll share other interesting info as they become available.

Caveat #1. The pho restaurant industry in the U.S. is quite dynamic, and with the popularity of pho on the increase, new pho restaurants are open all the time. I don't think there is a list anywhere that can call itself a complete pho restaurant directory. Since many available pho restaurant lists are really voluntary efforts, meaning the restaurants are either submitted by the restaurateurs themselves, or by diners giving reviews, the "most complete" list would have to be one that is active and updated often. I think PhoFever.com's directory is a good starting point.

One thing is for sure: the actual pho restaurant industry is larger than shown here. Once we can include them all, I'm sure adjustments of the rankings for some markets will need to be made. Not all, just some.

Caveat #2. Because of the dynamic nature of the pho market and the voluntary nature of these databases, absolute numbers are not available at this point. Much more important, though, are trends for relative comparison and quick glance purposes. You won't find exact numbers here, or anywhere else.

Caveat #3. Many many Vietnamese restaurants offer pho, but some specialty restaurants do not. Though they exist, I don't expect many non-pho restaurants present in PhoFever.com's Directory.

On with the stats. Below are some snapshots of the data. The market analysis itself is much more extensive. Click on the graphics to get larger versions.

The first graph shows the top 15 American cities with the largest number of pho restaurants. Many of us take for granted that we have a pho shop right around the corner, within driving distance, or multiple places to go for our pho fix. For many others, such luxury is not available to them. Much more detailed stats to come. 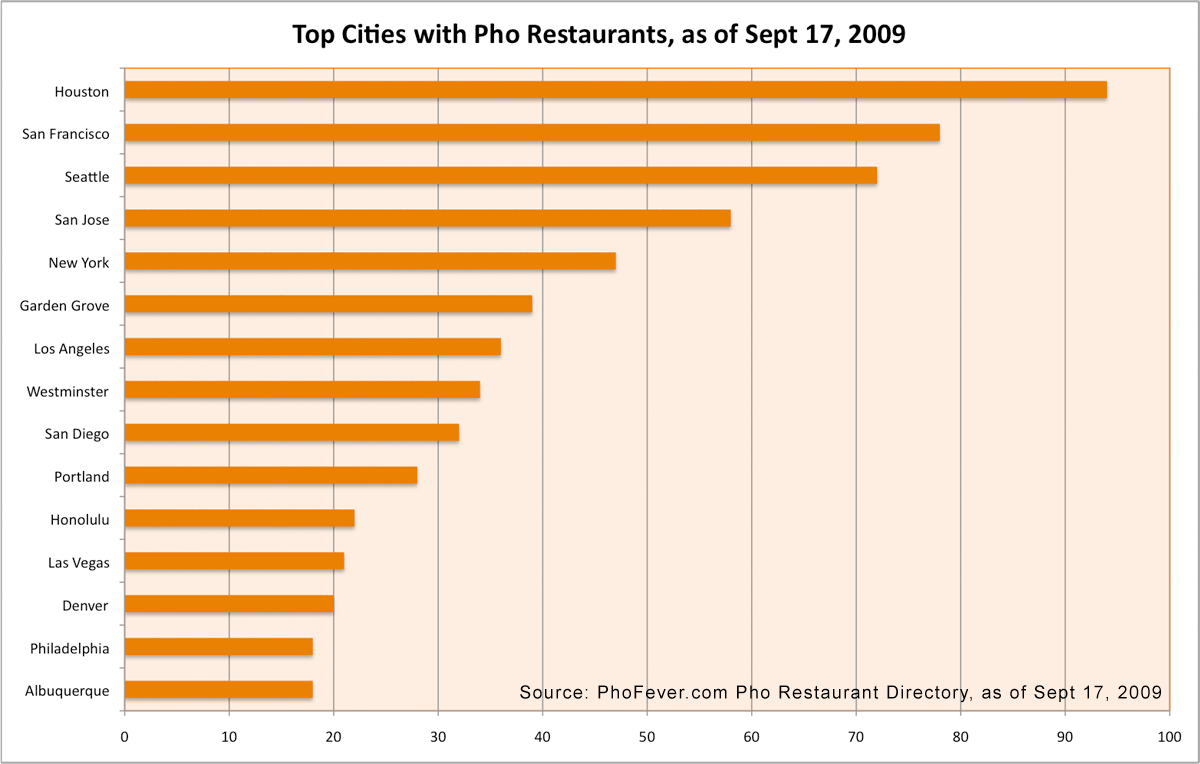 An overwhelming number of Vietnamese live in California, with many many more pho lovers who are not Vietnamese. Here are the number of restaurants doing business in California cities. San Francisco leads the pack with trendy places, high tech-mined population, cool young and old people (both restaurateurs and diners,) and a huge number of Chinese/Viet descents. My San Diego is not doing too bad at rank number 5. Collectively though, Orange County is still the place to go if large numbers matter to you. 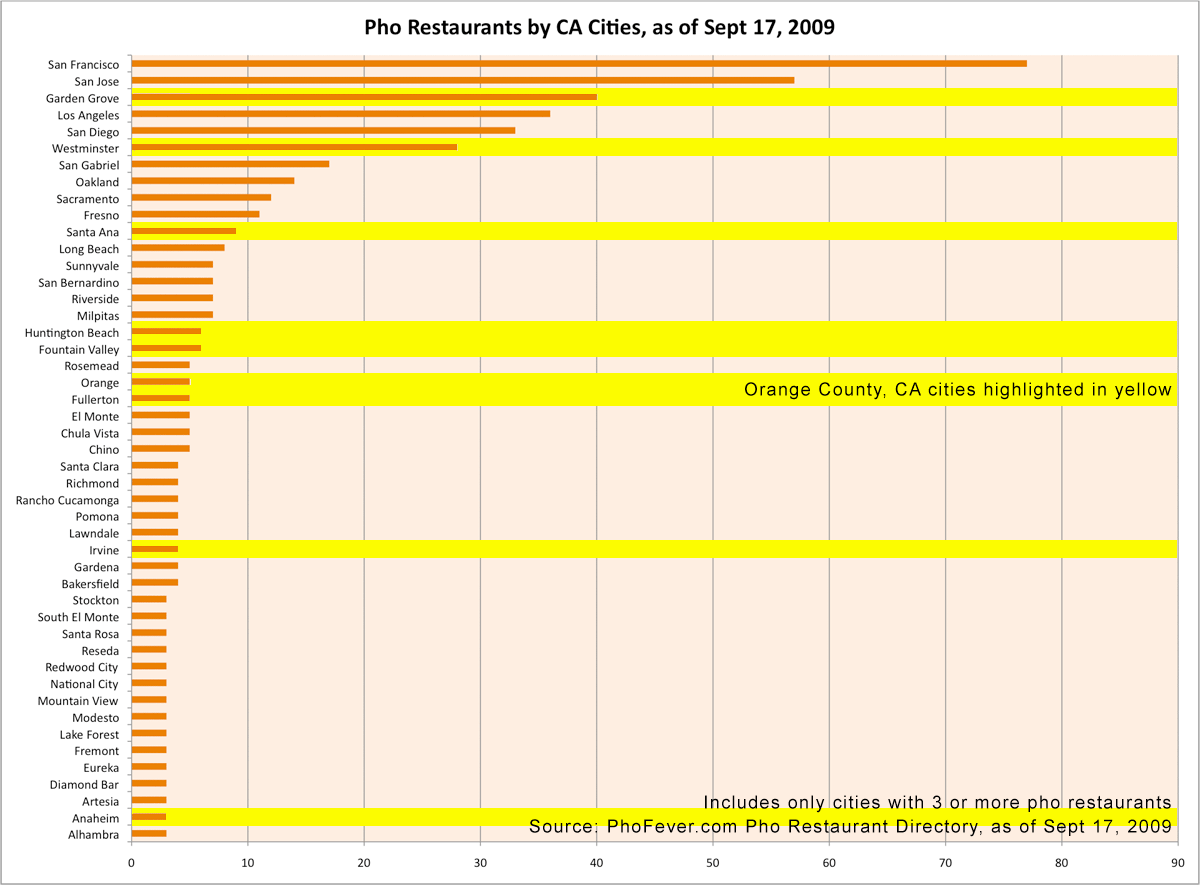 Of course east and west coasts of the U.S. have the most pho restaurants. Houston, Texas stands its own ground smack in the center of the country, of course with a very large Viet presence there. So what's amazing? It's the fact that, though still sparse in many places, there are now pho restaurants in all 50 states, including Alaska, Wyoming, Montana and North Dakota! The U.S. is a big place, so there's still some more work to do. 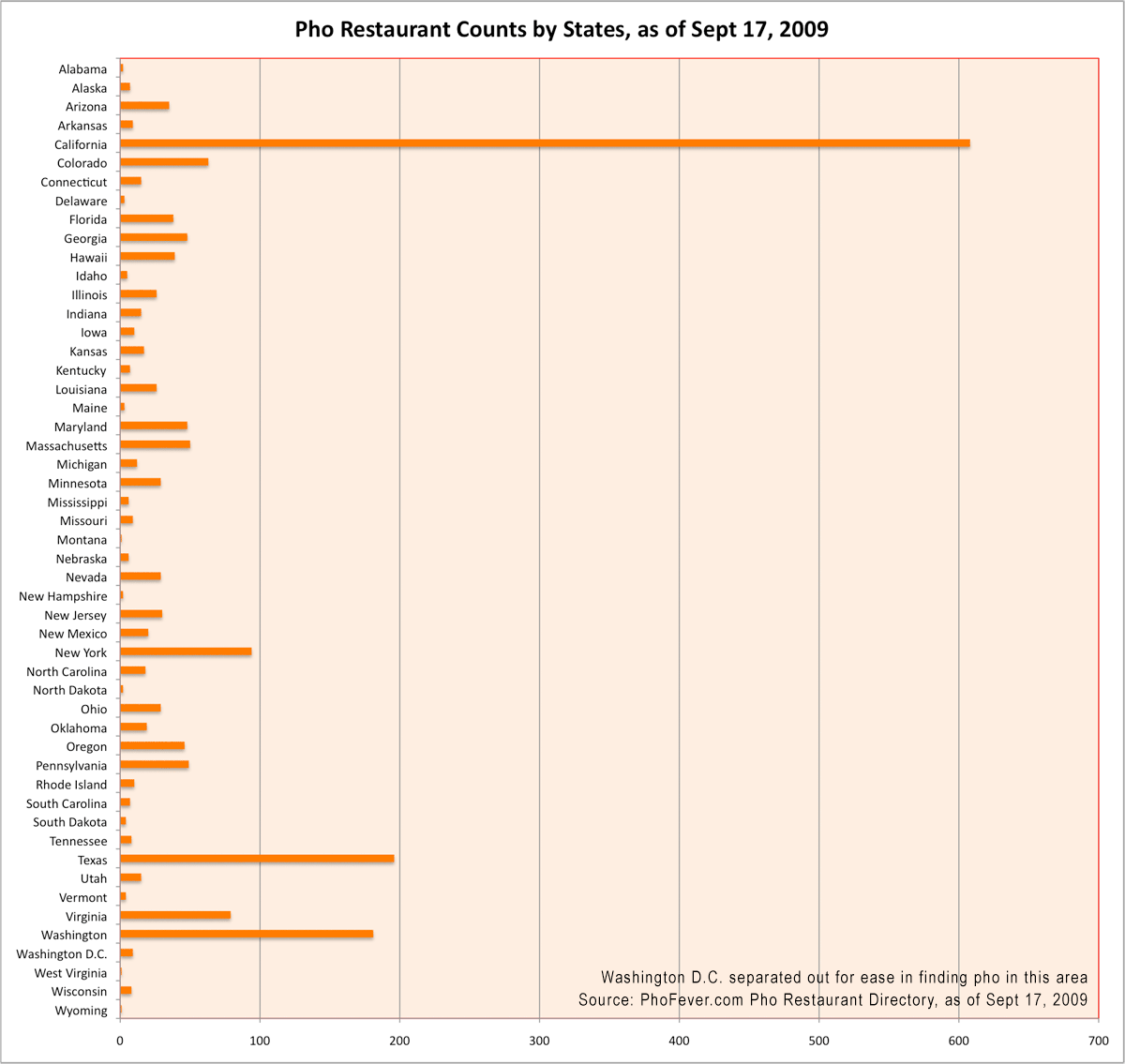 Stay tuned for more stats from the analysis.