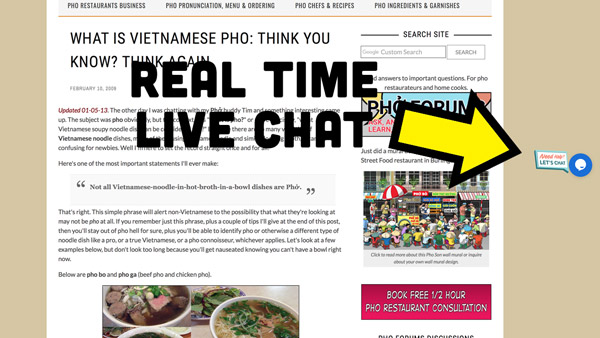 You may have noticed the Let's Chat feature to the right of the browser.

This is a new Live Chat feature just made available to pho restaurant clients as a way to conveniently chat with me when they have quick questions. This way, if I'm online then I can help quickly and efficiently resolve issues and questions for their businesses.

As you can see, the chat feature is opened to any and all visitors who want to ask me something about pho or pho restaurant business. So feel free to use it. If I'm online then I'll be happy to field any inquiry.

Here are a few recent chats.

From someone who was actually ordering in a pho restaurant

Visitor : What is well done in pho menu?
Cuong : Hi, thanks for the question.
Cuong : well done refers to the well done meat.
Cuong : it’s just a topping. This is one of my pet peeves about old school Pho menu. It's not the whole bowl that is well done. It’s very misleading.
Visitor : Thank you so much, we were having problem understaing the menu!
Cuong : Yes for sure. All it is is flank or brisket beef that's been cooked in the broth, as opposed to rare/raw beef in the bowl when the broth goes in.
Visitor : We have ordered our pho now! We really appreciated your replies!
Cuong : Are you actually ordering pho right now, and chatting with me?
Visitor : Yes, that's correct lol. It's crazy isn't it
Cuong : awesome!. Enjoy. I think this is a first!!!
Cuong : Let me know your location and I'll do a quick write about this on loving pho.com. lol
Visitor : Anyway we should leave you alone, haha. You are really helpful. Have a good one!
Visitor : Oh we are in Iowa City at the Saigon's corner
Cuong : Yes of course. Don't want to keep you longer. thanks and goodbye.

From someone who plans to open a pho restaurant

katbho : Love your website! Looking into opening a restaurant. Will contact you once I'm ready.
Cuong : Awesome! Will love to help.
Cuong : Make sure you get the first 1/2 hour free consultation. /free-half-hour-pho-restaurant-consultation/
katbho : For sure! Thank you. Just trying to get a business plan together before I contact you.
Cuong : That’s fine, though a better approach is to get me involved as early in the process as possible including the b-plan.
Cuong : This way you get everything right the first time.
katbho : That's true. I'll consider that.
Cuong : Cool. Do you have any other question?
katbho : I was truly wondering whether it's risky opening a pho restaurant in a place that is mostly non-asians
katbho : But I figured these are questions to be ask when I book a consult with you
Cuong : For now I’ll answer your question this way: as long as you have a solid concept and good execution, non-asian or asian is never an issue.
katbho : Awesome. Thanks! I'll work on preparing the questions for you and I'll book a consult. T hank you!
Cuong : Awesome! Goodbye and have a great day!
katbho : You too thanks

Visitor : No, not about Pho. My son brought us red & black pepper from Vietnam. I can't tell which is which by the packaging. The wording on the packages are the same. The only difference is one says Tieu Chin & the other says Tieu Chiin & Tieu So. If you could answer that question, I'd be pretty happy!
Cuong : Not sure I understand your question. Do you have a photo of these?
Cuong : If it is Tiêu chín then all this means is it’s peppercorn that’s been roasted/coooked.
Cuong : Hope that helps. Do you have any other question?
Visitor : uploaded photo 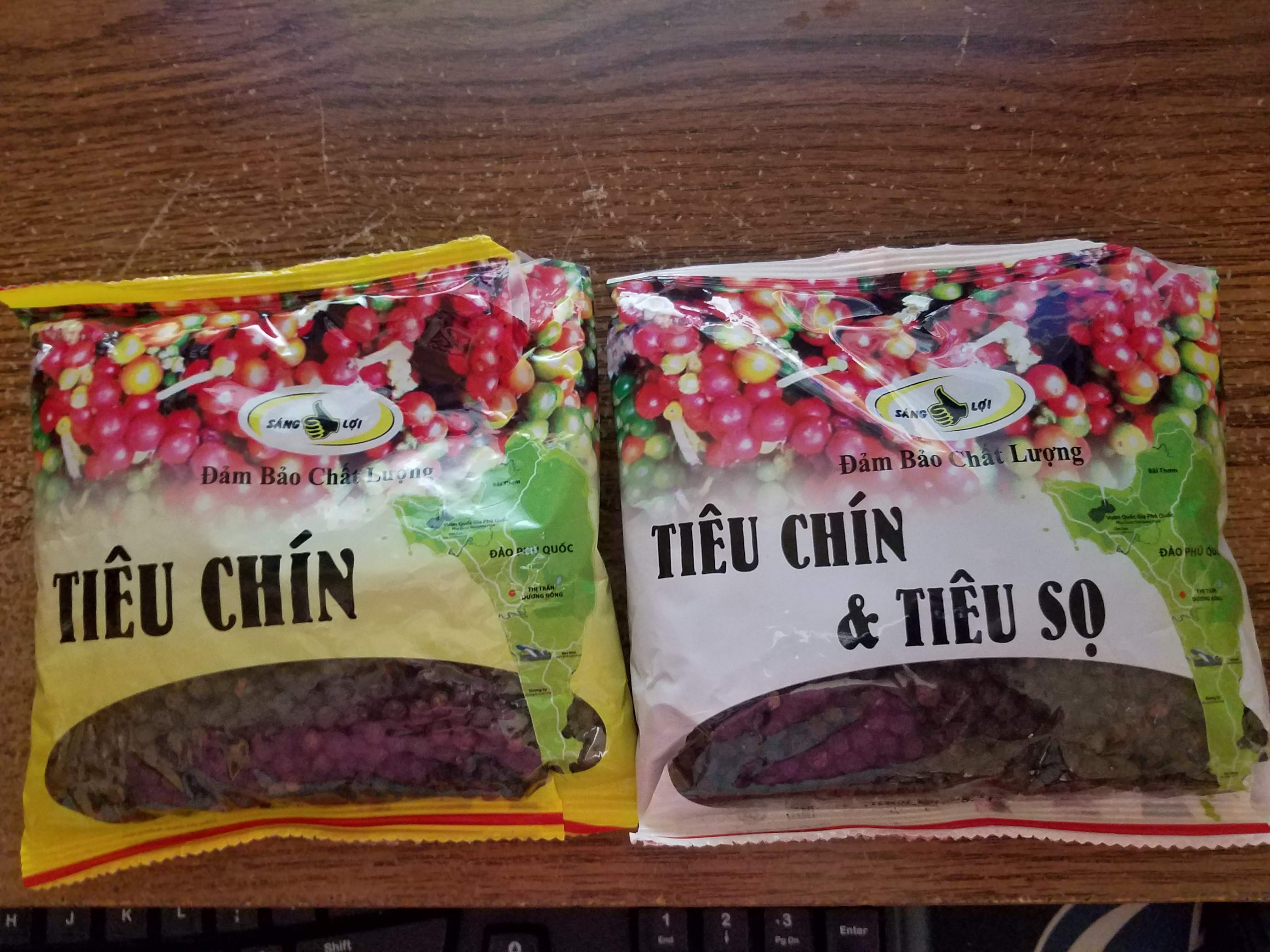 Visitor : These are the packages.
Cuong : ok let me look.
Cuong : ok so tieu chin is the riped peppercorn, and tieu so is a specific type of peppercorn that is white in color.
Cuong : Here's a page you can look at for some reference http://hattieuthanhbinh.com/kien-thuc-ve-hat-tieu/hat-tieu-so-la-gi.html and maybe use google translate to have better idea.
Visitor : I will do that. Thank you so much.
Cuong : BUt when they dry they may all just look the same.
Cuong : Guess the point being: one bag is of one type and the other is mixex
Cuong : Mixed I meant.
Cuong : Cool. Hope that helps. lol.
Cuong : Ah I read further a bit and it says the ripened red ones become tieu so.
Cuong : Going there? Great! Have a nice time and enjoy.
Visitor : Okay, thank you. I may have a question about pho at a later date. We are blessed to be going to Ho Chi Minh City next Feb or March.
Cuong : You may miss the Tet celebration. It’s closer to Feb.
Visitor : Our goal is Tet, which our son experienced this year.
Cuong : Ahh ok, then you’ll prob pick a good departure date.
Visitor : Yes, Sir. Have a great evening & thanks again.
Cuong : Thanks for the question and have a great day!
Cuong : Goodbye.

From someone who was making pho at home and needed help

Visitor : I am making the broth for pho but the grocery store only had beef bone in shank. Should I cut off the meat and only use the bones or can I leave the meat on the bone?
Cuong : HI: good question. You can actually do either way.
Cuong : But cutting out the meat allows you to cook the bone and meat separately, at separate lengths of time.
Cuong : I’m assuming you’ll cook the bone a lot longer right?
Visitor : Will the broth be too dark if I leave the meat on?
Visitor : I’m currently roasting all the meat. With the bones still in
Cuong : Actually I don’t think darkness of the broth is related to meat on or off the bones. It’s how you parboil them first.
Cuong : Roasting… hmmm. Not sure how that helps you but the burned outer meat will give color to the liquid.
Cuong : IS there a reason why you roast the meat?
Visitor : Yeah the recipe I’m using says to roast the bones first
Visitor : but I’m guessing the meat will cook a lot faster. Maybe I’ll take out early and cut off the meat and then cook the bones a little longer
Visitor : obviously my first time haha
Cuong : Yeah it’s easy fix. The bone will cook for hours, while the meat (depending on quality of the cut) will get tender faster.
Cuong : Just cut it off as you said, then cook them at different times. Then skim the scum as you go, best you can. Broth shouldn’t become dark.
Visitor : Ok. I’m about to cut the meat off because it’s almost done. Should I add the meat to the broth or just the bones
Cuong : Right. Trim as much meat off the bone as you can, then just give them different cook times.
Cuong : First check if meat is tender as you like. Then do following.
Cuong : If meat is as you like then no more cooking for meat. If not then give it more time.
Cuong : You said you’ve been cooking so how long has it been ?
Cuong : My guess: your bone and marrow is prob not done, so you’ll need more time on it, half hour maybe hour. When the marrow start oozing then you know it’s time. Just treat the 2 as differnt time
Cuong : Hope that helps.
Visitor : It’s been 40 min at 425
Cuong : ok if it’s 45 then bone defintely not ready, and meat may not be ready depending on your preference.
Visitor : this helps a lot. Hopefully the Asian market will be open next time so I can get the right bones! (Knee and shank is what I’ve been told)
Cuong : Not sure what 425 °F has much to do with it, because as you simmer the broth all you care about is light boiling, not temp.
Cuong : ASSUMING we’ve been talking about simmering in broth and not roasting, correct?
Visitor : No I’m talking about roasting. Haven’t put in broth yet
Cuong : ahh ok scrap all that. There is really no roasitng required to make pho broth.
V1560482023462569 : The recipe I have says to roast the bones and onion before adding to broth and then simmer for 6-10 hours
Cuong : I’ve been referring to broth making.
Cuong : The only roasting should be only light roasting. I’m not familiar with roasting for pho so can’t say much more.
Visitor : Ok. I’ll make sure not to roast next time.
Cuong : Viet cooking is similar to French’s. THink of roasting as a way to “brown” lightly to get flavors, but 6-10 hours of simmering will make your roasting worthless.
Visitor : Ok that makes sense. The recipe I was following said “roast bones till lightly browned” i’ve already Taken them out of the oven so hopefully I didn’t ruin it too much.
Cuong : I think your recipe is not very good. It tries to be fancy where it’s not needed. Should be simple as: simmer long time to get beef flavors out of bones and beef.
Cuong : Right take them out, trim meat from bones, then cook as normal, while watching the time, maintain low simmer, and skimming the junk.
Visitor : What do you mean when you say “skimming the junk”
Cuong : THen add spices and other flavors later in the process. Easy.
Visitor : last question. Should I shave all the meat off or leave some on?
Cuong : Sorry just skim the scum/floatng impurities coming out of the bones and meat.
Cuong : As mentioned earlier, I recommend trim the meat off the bone so you can cook either at diffrent duration.
Cuong : Some people leave some meat and fat on so they can eatthem (inlcuding the marrow) at the table. Yummy stuff if you’re doing it at home.
Cuong : Best of luck.
Visitor : Sounds good. Thanks for your help!
Cuong : Goodbye.

Ha ha there you have it. Really had fun helping people making pho or maybe making or understanding anything else I could offer. So go ahead, if you find me online, then chat with me.