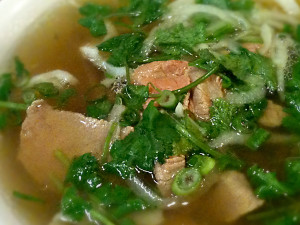 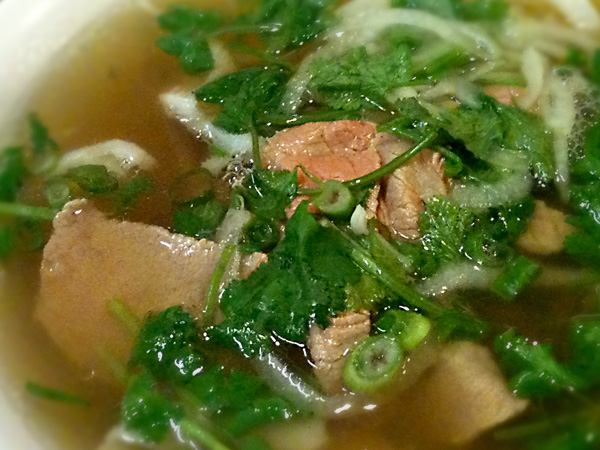 This topic is also published as an article here »

In the section leave the fat. I learned something new that with the added layer of fat it protects the broth from the air which means sense. Air increases oxidation and breakdown which for soup we want to keep its flavor as long as possible. But if I owned a restuarant I prefer to remove this layer of fat because achieving consistency is easier when removing this fat. I just freeze cooked soup overnight and ask staff to remove the fat. I watch Madame Vo owner on YouTube and he recommends adding some oil into the final bowl when serving. While I agree adding a bit makes it taste better but according to some yelpers the soup was too oily and they can taste the oil more than the soup. And I’ve seen this happened at a few places where the oil is so much it seems they didn’t even do any skimming or taste like it’s leftover. It seems in terms of achieving consistency its better to have staff remove this as part of the cooking process rather than adding it more oil or leaving in some oil. Pho filet soups are very clear and with no sight or hint of oil and it taste just as good or even better. Also I think less oily broth has the added benefit of appearance and in keeping with the healthy trends.

@Vincent: I think you may have mixed up between the fat resulting from cooking the proteins, and the raw cooking oil added just before serving. The two are not the same and are not comparable. The former is totally legit cooking practice, but the latter is questionable at best.

Fat layer protecting the food underneath, as discussed in this post, is a well known practice/technique in Viet, Chinese and European cooking. It’s similar to aspic or meat jelly dishes that are served in many cuisines. Examples of Vietnamese aspic include Thịt Đông (Jellied Pork), some Bò Kho (Viet Beef Stew) if lots of tendons are used, and Bún Bò Huế broth where lots of tendons and pig feet are used. Storing these in a cooler will turn them into aspic with layers of fat on top. Each individual dish has its own way of service including heating or not heating before serving. Obviously heating the jelly will turn it back into liquid broth form. We eat Thịt Đông cold, but if for some reason it’s heated then you’d get a fatty pork broth-like solution/soup. For pho, the broth does not have as much gelatin in it so it does not turn gelatinous state but the fat layer on top is pretty much the same concept.

One very important note for restaurant pho is that the tendons are never cooked/simmer together in the pho broth. Tendons are always cooked separately in restaurant environment. If we cook tendons together in the broth, then the collagen will come out as gelatin, making the broth murky and turning it into aspic.

Regarding adding raw oil to pho: I’m not sure what people are trying to achieve, but I think it's ill advised. I see people use all kinds of tricks in an attempt to make their pho better/different from someone else's. But this is one bad practice.

In the culinary world and for more well known cuisines, the only times when uncooked oil is used during service are 1) in Western salad dressings and 2) extra virgin olive oil in some Italian dishes, with the condition that a good quality oil is used. In no other instances of food service, Vietnamese or other food type, is use of uncooked cooking oil appropriate. Adding oil to a bowl of pho just before serving is definitely not recommended, whatever purpose this is intended to achieve. So I agree with you, even though our reasons may be different, that adding oil to pho is not a good practice.

Wow I've never heard of people adding oil to a bowl of pho before serving. That's kind of yucky. I'm not eating it if they do that. We know pho broth should not be murky when serving, my opinion is if people would spend some time to learn good cooking techniques and do it right, then they would not need any fixing "technique" afterward, whether it's too murky, too oily or too dark etc. My mom and aunts spend a lot of time caring for their pho pots when making pho and the result were always the clearest and tastiest broth.