How to Order Extra Bánh Phở Noodles With Your Pho

Bánh phở is the noodle used in the Vietnamese pho dish. Reader Eric left a request over at the other post "Pronunciation of Pho and Other Vietnamese Words and Phrases" inquiring about what to say when you want to order extra Bánh Phở noodles, or a side order of pho noodles. Eric says:

Hmm Google translation helps sometimes, but not in this case. 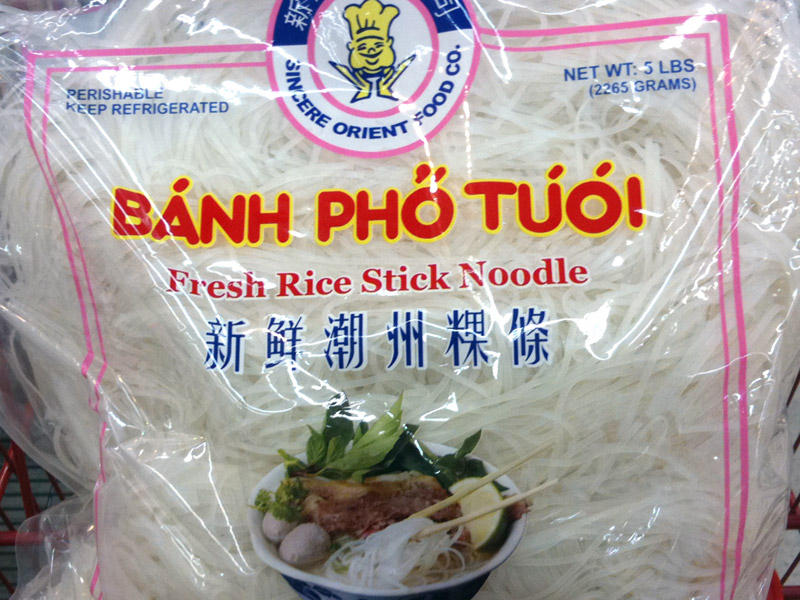 But first let's get something straight. In my opinion, the best thing to do is to have bánh phở added to your bowl in the kitchen before they pour in the hot pho broth. Some may prefer a side bowl of just bánh phở at your table, but if you think about it, you'll want everything in the bowl before the broth is poured in. This is because bánh phở needs to cook with the rest of the other pho ingredients in the bowl. Even if the pho noodles are blanched and then served in a separate side bowl at your table, you'll have to immediately put it in your bowl. Otherwise if you leave it in the side bowl while enjoying the main portion first, the side noodles will continue to cook on the inside and get all lumped up and mushed together, and will become cold and dry on the outside, all while your broth is cooling in your bowl as well. Anyway if you must then you must, but I recommend extra bánh phở inside the bowl, not outside.

Note that Eric's message implies that he wants certain quantity (a dollar's worth) of pho noodles. As far as I know, most pho restaurants either charge one price for sides or none at all. So specifying a dollar amount's worth of banh pho may not work well in most situations. Also there is absolutely nothing wrong with the "very hungry" part, but I'll leave that part out of the audio files as well. If someone really must have the "I'm very hungry" then please leave a request in the comment, I'll do it then.

As requested by Eric, below are 3 variations of ordering extra pho noodles when you're in a restaurant. The variation between each phrase is very minimal, but the impact can be major. They range from more formal to casual ordering tones.

Thanks for the question Eric!

So have you ordered anything extra with your pho? Take the poll below.