On Viet People's Expectations, Standards, and Ideals for Pho vs. Non-Viet 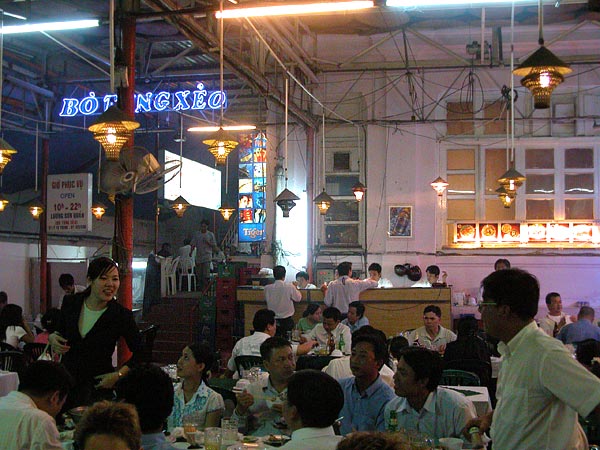 There's an interesting thread going on over at ChowHound.com titled "Best place for pho in NYC?" so I joined in. People were sharing their experience of pho quality, etc. of different NYC restaurants. One of the comments I made was "...it's pretty hard to screw up pho if the restaurateur knows anything about Vietnamese food..." and someone asked:

Your post makes me curious about Vietnamese people's expectations, standards, and ideals for Pho vs. non-Vietnamese. If it is pretty hard to screw up pho, why do so many people say there is zero good pho in NYC?

Can you describe the characteristics of great pho from your perspective?

So that got me writing a 613 word response, he he. Once I got going on pho, there's no stopping...

Anyway there are many things I said about pho quality and expectation of pho quality in that post that I thought would be interesting to readers of LovingPho.com. I'd write a similar post about the subject anyway but since I already wrote it there, here's the full text to share with you.

Admittedly "good" is always a personal judgement. For Viet people growing up with pho, we know what pho is supposed to be and taste like. Except for a bit of discussion about how much MSG may be in the broth, Viet people just don't analyze pho, the way this post [thread] does for example 🙂 So by the natural law of pho authenticity, bad pho restaurants will not survive and will disappear.

Now we bring in non-Viet clientele. By definition this group didn't grow up with pho, and because there are more chatters among those in this group, any misinformation/misunderstanding can easily propagate far and wide. For example, there is no such thing as seafood pho or pork pho or vegetable pho. But enterprising restaurateurs created them to attract non-Viet clients. Another example is there is no substitution for banh pho noodle in pho. But non-Viet clients may ask for egg noodles instead and the restaurant will oblige. They just sold another bowl and that's all they care about. In this environment, bad pho restaurants can survive or even flourish, further propagating the confusion about pho authenticity.

So what would I consider great pho? I'll just put it this way: it's both hard and easy to tell a non-Viet friend. It's hard because I can't tell you using words what pho is supposed to taste like even if I write a book on it; I can tell you about ingredients and freshness, etc but it won't help. And it's easy because you can find this out yourself. There are 3 ways so let me explain.

Sorry for the long post but I hope to have somewhat answered your question [...].

Oh one more thing. If you run into a Chinese-run restaurant that offers Vietnamese foods, don't be too quick to question its authenticity or quality. The Chinese have a large population living in Vietnam, so in all practicality their foods can be good Viet foods. If a Chinese also speaks Vietnamese, then you can be sure he/she came from Vietnam, and to a large extent, he/she knows Viet foods (but oftentimes with strong Chinese influence.) Not like in Europe where people from adjacent countries can speak several languages, if a Chinese restaurateur didn't live in Vietnam, there's no reason for him/her to speak Vietnamese, unless he/she is a linguistic professor or a diplomat. 🙂