Home›Pho Corner: Everything Pho›Understanding the Pho Menu: No More Ordering Pho by the Numbers

Understanding the Pho Menu: No More Ordering Pho by the Numbers 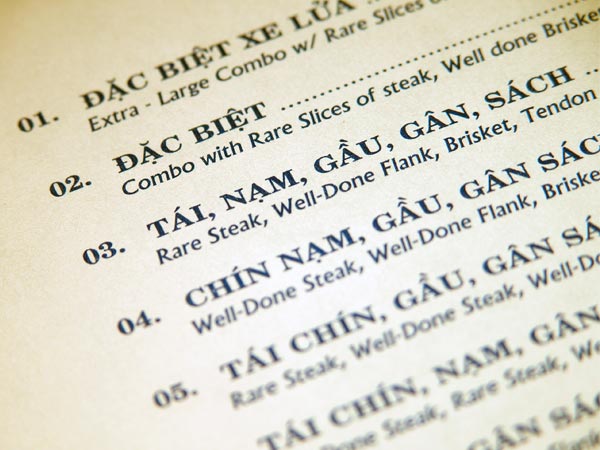 Ordering pho has always been a baffling matter to many. A pho menu, for the unacquainted, will seem like a mishmash of words that are as good as gibberish. And what's with all those numbered choices of combination and permutation of ingredients?

In an attempt to help an unfamiliar customer order a bowl of pho, Vietnamese restaurants inadvertently make their menus more complex than needed. But if you love pho, then knowing how to order pho is a must. It's pretty easy if you just keep these 3 things in mind: how much pho you want (regular or large size bowl), what the ingredients on the menu means, and which ones you like.

Bowl sizes come in small or regular called "nho" or "nhỏ", large or "lon" ("lớn"), special or dac biet, and the locomotive/train size bowl or xe lua. The train bowl is for the adventurous pho connoisseur, and it is also quite large for the average eater.

The two main types of pho are pho bo and pho ga, or beef pho and chicken pho, respectively. Depending on the restaurant you choose, you may also come across vegetarian pho, and semi-vegetarian pho dishes such as seafood pho or shrimp pho, as called by a few restaurants. In actuality, these non-beef and non-chicken soup noodle dishes are really "hu tieu" and not pho. For a good definition of pho, read the articles "What is Vietnamese Pho?" and "The History and Evolution of Pho."

So take your pick: beef pho or chicken pho.

For beef pho, you have a variety of beef parts to choose as the ingredients of your beef pho. The most basic meat that you can have added to your beef pho is sliced rare beef steak, which is called "bo tai" ("bò tái" or just "tái.") This is an ideal choice for first time pho eaters. It's not too exotic, tastes great and represents the typical minimal pho very well.

However, if you want something closer to the classic beef pho, choose ingredients such as "nam" (or "nạm") or sliced beef flank in addition to "tai." This means that you could order a pho dish called "pho tai nam" and you're good to go. So to stay simple: pho tai, pho nam, or pho tai nam. Pretty easy.

Outside of these two most basic beef cuts, there are a lot more exotic beef parts such as "gân" or tendon, "sách" or tripe, "chín" or brisket, vè dòn or crunchy flank, gầu or fatty flank, chín nạc or sliced beef brisket, and bò viên or meatballs. The meatballs in a pho dish are not to be likened to the meatballs you encounter in Italian pasta dishes. Pho meatballs are a bit chewy because they contain pieces of beef tendon and cartilage. Yum!

If you prefer chicken pho, you also have a wide selection of chicken meat parts such as chicken back, chicken neck, chicken wings, and organs such as heart and liver, even unlaid chicken eggs. These may sound strange to non-Asians but are commonplace in Asia and very tasty. If you get a restaurant that serves free-range chicken, gives a choice of side dish of dark or white chicken meats, and serves with a side dipping fish sauce with ginger, then you are in pho ga heaven.

Maybe garnish is a misnomer when applied in the case of pho. Pho garnishes are not just for decoration and embellishment. You actually eat them as part of the experience.

When it comes to pho garnishes, the standard fare includes "giá" or bean sprouts, "chanh" or lime wedges, "rau quế" or basil, "hành" or scallions, "ngò" or cilantro, "ớt" or jalapeno or Serrano chilies. Some restaurants offer more options, such as "rau ngò gai" or culantro, or sawgrass, also known as saw leaf herb. Culantro is abundant in Vietnam but harder to get in the U.S., hence it's an option. Pho garnishes are always served with the meal, which means you do not have to order them, but knowing what they are and what they are called will help you anticipate and try them to get the taste that you want. By the way, putting garnishes in your pho is strictly a personal preference, so don't let anyone tell you that you have to put them in your bowl.

You can also choose from various optional additions, such as the popular hot chili sauce or "tương ớt" (Sriracha brand or equivalent), hoisin sauce for pho or "tương ăn phở". These sauces are always available at your table like salt and pepper in western restaurants. Again using the sauces is a personal choice. Many mix them directly in their pho broth, while some mix them in a small saucer for dipping the meat.

So now you are armed with the basics of pho menu with some knowledge on how to order pho. For "advanced" pho ordering, read my article on "Tips on Ordering Pho Your Way: Just Tell Them What You Want."