Home›A Century of Pho›Pho in France - Petit or Grand Pho, It'll Be Just Like Home

Pho in France - Petit or Grand Pho, It'll Be Just Like Home

A Century of Pho, Pho Corner: Everything Pho, Pho Op-Ed
by Cuong Huynh

Updated 05-09-10. One can say that Vietnamese pho is one of Vietnam’s cultural ambassadors, spreading awareness of the Vietnamese heritage through its flavors and its heartiness. It can easily be argued that pho has taken root most strongly in the United States because of the large Viet population, but its presence can definitely be felt elsewhere. France is one of them, and the influence of pho in France is nothing short of phenomenal. Like many other places outside of Vietnam, the popularity of pho in France is undeniable. 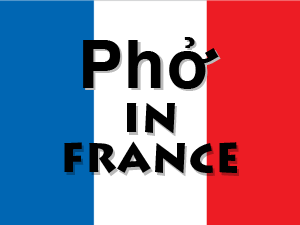 Pho and the French Influence

Colonization, and the shared history that it brought, has put strong ties between France and Vietnam. As most of us who know our world history, Vietnam was once known as the French Indochina under the rule of France. It was only in 1954, when Vietnam was split into the North and the South, did France relinquish its dominion over the country.

Many Vietnamese culinary experts believe that pho is actually the Vietnamese version of the pot au feu, the French beef stew. Renowned French chef Didier Corlou describes certain similarities between pho and the pot au feu, such as the use of beef marrow bones to create the broth, the time it takes for the broth to cook, and the charring of garlic and onions to add a sweet, roasted flavor to the dish. View an in-depth discussion of "The History and Evolution of Pho."

But this is perhaps where the similarity ends. Vietnamese ingenuity made pho uniquely Viet, with the use of star anise and other Vietnamese ingredients in the broth. The Vietnamese of the south made the dish even more distinct by enhancing the experience using lime juice, hoisin sauce, Thai basil, sliced chili and culantro.

So, one can say that among the reasons why Vietnamese pho is popular in France is because of the shared qualities between pho and pot au feu. Pho is familiar enough to the French to make them feel safe in enjoying it, and yet pho is exotic enough to challenge their sense of culinary adventure. Personally, I think colonization has made the French and the Vietnamese forever tied in a special bond of language, food, and culture.

How Pho Came to France

Pho is definitely a Viet concoction. But given that the coming of the French gave impetus to the creation of pho, how then did the child find its way back to the home of its mother, so to speak? The answer is that France was one of the destinations chosen by the Vietnamese refugees after Saigon fell to communism in 1975. For many Vietnamese, France is the "natural" other homeland outside of Vietnam. Many Viet traveled there even before 1975. There were already familiarity in the way of life between the two peoples. The Viet refugees knew that they could restart their lives much easier in France, and many did.

In fact, long before the Fall of Saigon, there was already a small Viet community living in France. Many Vietnamese have been coming to their conquerors’ homeland, perhaps brought to the country as retainers by their French masters.  Or perhaps these people sought France on their own to seek fortunes they would not have had if they stayed in Vietnam. Surely many Viet learnt about the western ways, in education, mathematics, science, politics and business, from the French. But Viet communities in France never really took roots until after 1975, when it was clear that they had to leave their own country behind.

As always, where there are Vietnamese, there is pho.  And regardless of pre- or post 1975, Vietnamese immigrants who came to France will always have pho to fall back on.

Pho in France: Hearty Fare for the Budget Traveler

Another possible reason for the popularity of pho in France – or at least in Paris – is the fact that restaurants serving pho is the place that travelers on a tight budget go to for a good meal. You can get a hearty serving of pho in Paris for the average price of €6.00, which is pretty close to U.S. pho prices. Whether you get the petit bowl or the grand bowl, you will get what you have expected to get – the rich and aromatic broth, the chewy rice noodles, the filling slices of beef and all the herbal fixings that come with each bowl.

Newsweek’s Budget Traveler website is one of those sites that promote Vietnamese restaurants to budget travelers visiting Paris. Restaurant reviewer and author Alexander Lobrano’s article entitled “Affordable Europe: Dining wisely in Paris” says that the wise budget traveler will not go hungry if he or she visits the large Asian neighborhoods located near the Place d’Italie.  There are many places here that serve enticing, satisfactory and largely affordable pho.

Pho is especially famous in Paris’ Chinatown found in the 13th arrondissement. The area is considered as the main quarters of Asia in the country. This area is teeming with Asians who have brought more than their culture to the country. The area is as varied as a bowl of pho and has become a cultural landmark home to both Asian and French natives, all bound together by a love for the distinct Asian culture, and of course, the cuisine.

So Mr. Lobrano named the Asian neighborhoods around Place d’Italie as a good starting point in your quest for a good bowl of pho in Paris. While there are many Vietnamese restaurants here that serve home-style Vietnamese cooking, including pho, I can't even beginning to list out and comment on all places worth visiting. Rather I'll just highlight a few here to give you some flavors of what you may find in your travel in France and Paris in particular. Hopefully pho connoisseurs in France will want to share their pho experience and contribute their views in the comment section.

Among the most popular of these Vietnamese restaurants in this area are:

As in small Asian restaurants all over the world, the emphasis is on the food, not decor, comfort, presentation or etiquette. Good service is based on how hot the food is, how quickly it is served, and never mind if it’s literally thrown onto the table without so much as a nod.

If the Chinatown area in Paris is a bit too much for you, pho can also be found in another secondary Asian quarter in Paris, located around the metro Belleville quarter. The area lies at the junction of the 11th, 12th, 19th, and 20th arrondissement and is an area full of southeast Asian restaurants of all kinds offering cuisines from Thailand, China, and Vietnam since the 80s. There are several Vietnamese restaurants there where you can order and enjoy a great bowl of pho. Although a lot of French are not familiar with the authentic taste expected from pho, most pho restaurants in France are often packed with people, especially during breakfast and lunch. One popular Vietnamese restaurant in Belleville is the Hawaienne where you can enjoy great-tasting Vietnamese food including pho. The restaurant is located at 15 rue Louis Bonnet at the 11th arrondissement. As always, when in doubt, go where the Viet people go.

As always, whether you are sampling pho in Paris or anywhere else in the world, when you visit a Vietnamese restaurant, the quality of its pho is the gauge by which you judge the quality of their food. Also, remember the rule of thumb when it comes to eating pho in a restaurant: The smaller the menu is, the better the restaurant’s pho is bound to be. This rule applies everywhere, whether it is pho in France or anywhere else in the world.

Pho in France, or pho en France. Either way, there's a nice little ring to these words.