Updated 08-26-14. It’s unfortunate that this video has been taken off of YouTube for copyright infringement issues. It’s double unfortunate that the copyright holder decided to not share anywhere for the world to see this great documentary on a great pho family. You can no longer see the video, but you can still read the transcript.

Here's a unique YouTube video telling an important story about a great pho family in Vietnam. It made my list of top phở videos (Great Vietnamese Pho YouTube Videos Worth Seeing.) It's narrated in Vietnamese, so not surprisingly it has a very limited audience. I think non-Viet speaking pho lovers will find it fascinating just like I did. For this reason, even though the audio is quite degraded, I was able to make a loose transcription of the video to share with everyone. Some specific audio details may be lost, but I believe the overall meanings are still intact.

The whole program is more than 16 minutes but hamivovn, the YouTube uploader of this video, had to break it into two 8-minute parts, because YouTube only allows 10 minutes maximum per video upload. So here's part one, beginning with the video itself, followed by my loose transcript. Time stamps in brackets [ ] match video timecodes for easy reference.

The Co Family and Pho Hanoi

Early morning in the old copper antique row Hàng Đồng, the small shop at the crossroad of Hang Tai and Hang Dong seems completely hidden among the constant noisy of the surrounding commerce activites.

The large block of well-done beef steak for many years has come to symbolize the inviting sign that welcomes customers to the many Hanoi pho shops.

The large vat with soup stock as clear as rain water just comes to its boiling point.

Every morning, as the air is still full of morning dew, the shop owner and his wife together with their children begin their daily chores as owners of a pho shop. This is hard work.

This is the family business that has passed down to them through 3-4 generations.

The smokes and steams from boiling vats are the signs that easily identify these family-owned shops as the famous pho shops of Hanoi. The fragrance of the familiar pho and its tasty beef always seem to bond themselves to their server's presence, in their hair and in their clothes. 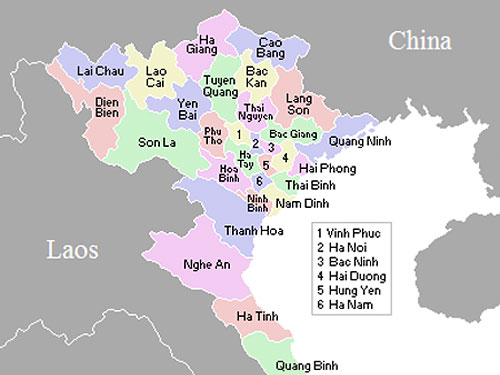 Known as the multigenerational pho of Nam Dinh, there's only one kind of pho: beef pho or phở bò.

[1;32] The family Cồ started from the village Vân Cù, district of Nam Trực in the town of Nam Định. This man's father, Mr. Phở Chiêu, or elder Cồ Như Chiêu, opened this pho shop, called Hàng Phở Đồng (or Pho Hang Dong,) among the copper antique row since the middle of the 20th century, and handed it down for him and his wife to take over the business to this day. Mr. Phở Chiêu himself was in fact the first-born son of grandfather Phở Cồ, who brought his pho from Nam Dinh to make a living in Hanoi back at the beginning of the 20th century.

Like any other well-known pho shops in Hanoi, Hàng Phở Đồng not only has many regular customers, but always attracts many more new customers all the time.

[2:15] Like this guest. Every morning he walks 5-7 km to come to Pho Hang Dong in order to enjoy a bowl of authentic Phở Chiêu, as the pho is still called.

Guest Mr. Nguyen Huu Tho says: "The pho here is very good, fragrant, the noodle is so soft. I like it so much [undecipherable audio]."

Sitting at the same table is a visitor [undecipherable] of Phở Chiêu. Guest Mr. Duong Dinh Thien says: "I came here to eat ever since the day when it was still called Phở Chiêu, who was the father of the current owner. Now I still come quite often. The pho here has a special characteristic that is just the perfect taste for us."

Like many third-generation decendents of the family Co from Nam Dinh now in Hanoi, the shop owner Mr. Việt and his wife are very popular among many customers, owing to the experience and discipline passed down from his father before him.

[3:30] Mr. Cồ Như Việt says: "Since I was small, I have followed them [his parents] everywhere to work this business. Now in my 50's, you can say that I know the business inside out, of course because of what they have taught us and left for us. My brothers, all running famous pho shops around Hanoi, have also followed the family business. Both our father's and mother's sides have been successful and dependent on this profession. All the other well-known pho shops from Nam Dinh in the old days have also made their ways here [to Hanoi] to work and help their family business to prosper."

Mr. Việt: "The way to maintain the delicious taste, first off, one must possess a real passion for the profession. You cannot use tricks, you cannot be deceitful, or use other schemes, in order to achieve a delicious bowl of pho, with delicious broth, and fragrant meats."

[4:27] So then as it turns out, almost all the pho Nam Dinh in Hanoi have come from the same family of the village Van Cu, district Nam Trực in the town of Nam Dinh. 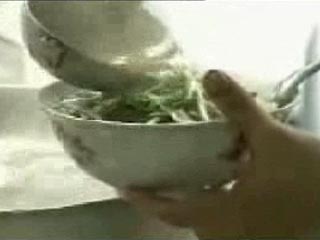 It has been known among Hanoians that in Hanoi there are 2 famous pho shops. They are the family Canh Diễn from the province Hà Tây, represented by the pho shop Pho Thìn by Hoan Kiem Lake, and the pho shop Tư Lùn in the Hai Ba Trung district. Today descendants of the Canh Dien family from Ha Tay, and many other pho chefs trained by both families, also operated dozens of pho shops around the streets of Hanoi. Not surprisingly, the 2 original pho shops on Dinh Tien Hoang and Hai Ba Trung streets still maintain business operation regularly.

By the 1990's into 2000's, the pho family from Nam Dinh has surpassed pho from Ha Tay in operation and popularity. The children of the family Co's third-, fourth- and fifth-generation, and their families, have, are and will gain the majority of the pho market.

[5:41] This is the pho shop Cồ Cử on Van Hieu Street as it appeared in the mid 1990's. The owner, Cồ Hữu Cử, though having the same surname, is actually of the same descent but by a different lineage from the descendants of Mr. Pho Hung [?]

Also from Nam Dinh, he had been in the profession for many years in Hanoi under the name Pho Co Cu, and his shop has also become quite famous. For Co Cu, finding a stable location to operate his pho business has not been easy, and at times the challenges seem insurmountable. But he is not one who is easily discouraged, like the old saying: "lửa thử vàng, gian nan thử sức," a phrase that loosely means "when the going gets tough, the tough gets going."

[6:29] Recently Co Cu has taken his pho shop to a new location on Nguyen Chi Khanh Street, and has been doing well. It's only 9 AM, yet many of his vats have already emptied. His broth is so well brewed that, although down to the last few ladles, the liquid itself is still clear and full of fragrance and flavors, its quality just like the full vats of Pho Hang Dong in early morning.

Another unique characteristic of the family Co pho lies in the wide and long strands the pho noodle, or banh pho.

[7:01] Mr. Co Cu: "The banh pho itself has been passed down from the ancestors, and truthfully, today in Hanoi one can probably count only a few banh pho makers that make the family-style noodles like ours. These banh pho have been cut by hand, they're always large in size, and they go together very well with the pho broth."

"To tell the truth, our shop here may be at a disadvantage when it comes to economics, but really we do have our reputation."

[7:46] It's not until the afternoon when customers have thinned out a bit that Mr. Co Cu then has a few relaxing minutes to greet and chat with his special guests. Visiting today are Mr. Phở Hùng, an uncle of Mr. Co Cu, and Nguyen Dinh Rao, a specialist in Vietnamese cuisine studies and President of Unesco Club of Gastronomy.

You can view part 2: "Pho Dynasty: Pho Hanoi by the Multigenerational Co Family from Town of Nam Dinh, Part 2."