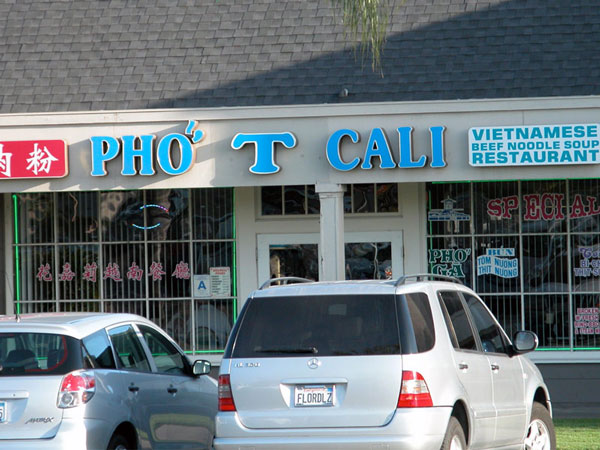 Updated 10-02-12. Pho Cali, Pho HoaCali, Pho Cali & Grill, Pho T Cali, Pho Cow Cali, Pho Cali Restaurant. When it comes to naming a pho restaurant, it seems we Vietnamese have a problem with good, creative English names. [Rant warning] Now before one says "what about Pho King, Pho Real, What The Pho!, etc." I will just say this: Sure, funny and creative stuff they are. But those get old, plus I don't like it when someone is taking my beloved pho a little too low on the respect scale. There, I said my piece.

Back to Pho Cali. Don't get me wrong, if you understand Vietnamese, then there are some very cool names around. But since this is about Pho Cali, let's just stay on topic.

Dave Cook from Eating In Translation left me a message today. Dave writes:

I came across your very engaging pho website today, and in the near future I'm sure I'll be brushing up on my Vietnamese pronunciation. But in the meantime, I hope you can help answer a question that I couldn't answer for myself by looking at LovingPho.com.

I'm wondering whether the "Cali" in pho Cali, which I encountered in the Bronx, New York, on a restaurant's business card, is meant as an assertion of regional style and quality. New York pizza, to take one example, has long been considered a style of its own, and a mark of quality, even if pizza lovers in Naples, Italy, might disapprove of the preparation. Is pho Cali now considered emblematic, in some way, of California, enough so that in other U.S. states you can now seek out both New York pizza and pho Cali?

Interesting question Dave. Let's break it down this way. If you've read my article on Bolsa called Vietnamese, Little Saigon, Bolsa, and Pho by the Numbers, then you've had a little peek into how we Vietnamese think. We'd say "let's go to Bolsa," to mean 'let's go to Little Saigon in Orange County, CA and do a little shopping, and a lot of good eating.' Vietnamese like to take Western words (first French years ago and now English) and make them our own. Anyway, Vietnamese like 2-syllable words, and the word California has way too many syllables (5 if you have to ask,) plus the -nia part is kind of weird for many older Asian folks to deal with. Therefore we just say Cali. Short, easy to spell and say, easy to remember. American-born persons would say SoCal or just Cal for short, but Vietnamese like "Cali". 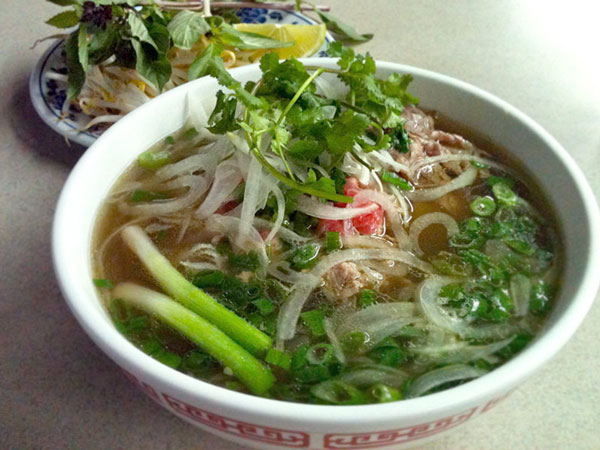 Next, because we love Cali, we'll put Cali on everything we can. Vietnamese in other states desire to be here (despite what they may say otherwise ;)) According to Wikipedia on U.S. cities with large Vietnamese American populations, the 3 with the highest population of Vietnamese descent by percentage are in the good old Cali (San Jose, 8.8%; Santa Ana, 5.7%; and Anaheim, 3.1%) and of the top 10 U.S. cities with the highest Viet population by percentage, Cali has five (San Jose, Santa Ana, Anaheim, San Diego and Oakland.) So yeah we love our Cali. And guess what, Vietnamese in other states love our Cali too. Little Saigon in Orange County, CA is still a destination for many Viet visitors from the other states. They come here to visit friends and families, and/or just to check things out, to get a little taste for the old country.

Many Viet families when immigrated here to the states, mine certainly included, were sponsored by American families to all corners of the U.S. Yes, freezing cold, scorching dry heat regions and all. Naturally large groups of Viet refugees coming out of Camp Pendleton in CA (refugee staging and processing area) found that we didn't have to go far. Southern Cali was as good as home for us now. And the community flourished with a lot of personal determination and a little bit of help from the nice year-round warm weather. As a result, the rest of us, no matter where we ended up in other states, always look back to Cali as our new home away from home.

So far there is no pho in the picture... Well that's because it has nothing to do with pho actually. Just as you'll likely see Pho Bolsa in San Diego or in Sacramento or in York, Ontario, you will see Pho Cali in many places including the Bronx, New York. Vietnamese (except for a few that are more savvy with doing business the Western ways) just don't like taking claim to a name with copyrights and trademarks. If there's a great name to be had, then you'll find it popping up everywhere. There's not been much attempt to control such dynamic.

So my dear friend Dave, I'm sorry to tell you the unfortunate news: Pho Cali is not like New York pizza. There is no such thing as Cali branded pho or Cali pho brand that is comparable in the same way New York pizza is. It's not a style of pho, it's not a regionally well-known pho in any sense, and it's not representative of any expected quality. You can't go to a restaurant and ask for "pho Cali" because it does not exist; what you'd get would be similar to pho that you can get elsewhere in the states, taking into account variations in quality, quantity and price. Pho Cali is just a popular and easy to remember name. Just don't believe it when someone tries to explain it any other way.

Thanks for a great question. Visit Dave's blog Eating In Translation.