Home›featured›People, Technology and Competition Will Drive Another Pho Transformation

People, Technology and Competition Will Drive Another Pho Transformation

There is no question phở is very much popular around the world these days. The traditional, "authentic" pho will be around for a long time, but on the other hand, pho is also taking on a new transformation that will change how it is made and served in the near future. This is the natural path pho will follow and develop, just as it has in the past. Change is coming for pho and we're already heading that way in some ways. 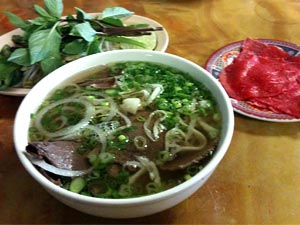 Take a look at the major events in pho history:

Now that pho has gone global, all conditions for a new change are in place. Who will stimulate the change, and how that change will be made exactly, is yet unknown. All I can say is, once that happens, people will go gaga over it to make it yet another new trend.

Changes can be natural and organic, or it can be forced and promoted. Take the global giant Coca-Cola for example. Jessica Jacobsen wrote in the recent article Beverage Industry article Foodservice operators promote premium beverage options for increased margins. She said

The Coca-Cola Co., Atlanta, which launched its interactive fountain innovation the Coca-Cola Freestyle machine in 2009, also has built upon its fountain platform. The company has expanded its dispenser lineup to include three countertop models. Two of the models are designed for medium-volume locations and able to dispense 80 different beverage choices. The third unit is suited for break rooms and cafes and features 35 drink options.

The Coca-Cola Co. also enhanced the “Create Your Own Mix” feature on the Coca-Cola Freestyle app. The smart technology, available on Android and Apple devices, allows consumers to tap and drag three different flavor options from more than 100 choices and adjust the percentage of each mix. Consumers can then scan the QR code to connect with a Coca-Cola Freestyle machine to dispense their personal creation.

Not that Coca-Cola is doing bad in global sales. Like any good business, the company works hard to compete and sell more of its products. It's a sure bet that they won't change their Coke formula, so the next best thing is to develop new ways to sell the same products, using innovation and technology. The same concept can and should be applied to pho as well.

So here are a few important factors that will fuel new changes in pho. It can be a single thing, or a combination of these things that will be the force of change.

I am not in the business of telling the future, but because I love pho so much, I always wonder where it's heading and if I will like its new look and taste. I always look out for things that can and will change my beloved pho. Pho customers won't know what hits them when it finally arrives, and pho restaurateurs can make a killing if they look out for it. You can't lock up a good thing. Once it's out and people know about it and love it, it's no longer yours. Ever heard of dry pho Gia Lai which was created within Vietnam itself and is creating a strong following? Amazing.

What do you think?