The Facts about Vegetarian Pho or Pho Chay

Updated 03-17-12. Pho is one of the most beloved dishes in Viet cooking. Put a bowl of this rice soup noodle concoction with rare beef, well-done beef and tripe in front of me and I'm in heaven. The only acceptable types of pho should have either beef or chicken, save for one special exception. This exception comes in the form of vegetarian pho, also called "pho chay," which is more common and popularly prepared in Buddhist temples and specialty vegetarian restaurants. 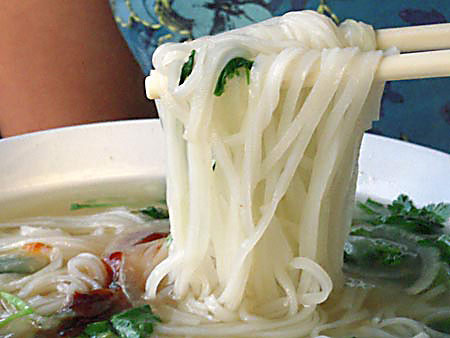 Pho, being a staple Vietnamese cuisine, naturally had to be part of the Buddhist cuisine in Vietnam. Like with many other Viet dishes, Buddhist monks found a way to make the meat-based pho part of their cuisine in the form of imitated beef, chicken and vegetarian pho broth.

Practicing Buddhists have long observed eating strict non-meat meals as part of the religious observance. As a side note, it should be pointed out that vegetarianism is not required in order to follow the Buddha's path. Consuming chay food, normally called "ăn chay" or "chay eating," is not about vegetarian food as defined in the West. Rather it's more about refraining from the acts of killing animal and plant lives, for food or otherwise. The health benefits as touted by many in the U.S. are only side effects.

The Buddhist cuisine is heavily influenced by East Asian cuisine. Buddhists follow a vegetarian diet to adhere to the principles of "ahimsa" which means "non-violence." There is another important distinction between the common vegetarian pho and the vegetarian pho served at the Buddhist temples. While Western vegetarians only avoid eating meats, East Asian vegetarians, particularly Buddhist followers, are prohibited from harming plant life. This means that they also avoid root vegetables like onion, carrots, and potatoes. In some cases, however, this is only strictly followed during special occasions.

Buddhists, especially in Vietnam and China, also generally avoid strong-smelling plants. According to Buddhist teachings, there are certain acrid and strong smelling vegetables that should also be avoided. This includes onion and coriander, which also happen to be two of the defining ingredients/garnishes of pho. This means that the vegetarian pho served at the Buddhist temples also do not have these two ingredients as well as other strong smelling vegetables. Thus the aroma of a bowl of pho chay is not as readily recognizable, and pho chay broth will often taste like other generic vegetable broths.

So if you've never had anything chay before, you may be disappointed with pho chay. If not done right, pho chay will taste a little watery, the whole bowl of pho will not have the familiar pho flavor and aroma, and will lack the essence of the star anise, charred onions and other ingredients that make pho instantly recognizable. I've had my share of pho chay and other chay foods. For me, although the food has to taste good and in fact many were very well prepared, appetizing and flavorful, it's more about knowing you've done good things for your body and the world around you.

Vietnamese chay restaurants also follow this rule very strictly because the clientele demands it. For those eating chay regularly, chay restaurants offer the only good alternative for eating out. Whether you're in a regular pho shop or a vegetarian restaurant, if you're not sure about the pho chay they offer, just ask the restaurant operator if their chay foods are really chay. You will get the truth either way because Viet people respect eating chay and are very honest about chay foods.

On the other hand, there is also this thing called semi-vegetarian pho found in most pho restaurants, some of which have only vegetable ingredients but a broth that is still made with meat. Others replace beef and chicken with seafood and call theirs seafood pho or even chay pho. Many of these restaurants take the more liberal definition of Western vegetarian foods to attract non-Asian clients. But for me, pho chay or vegetarian pho should follow the strict rules of having absolutely no meat or seafood or any other meats.

Good chay restaurants are hard to find, but when you find one it will usually offer pho chay on its menu. One such place is Veggie Life Restaurant in South El Monte, CA. Another one is Phở Chay Như as written about by The Gastronomer. Unfortunately you'll have to go to Vietnam to enjoy the latter's foods.

The Verdict on Pho Chay

In truth, the real Vietnamese pho is an extreme prohibition for Buddhists. Not only is it meat-based, but it also banks on the strong smell of garnishes to liven up the taste of the soup. Aside from that, animal innards and organs are also strictly prohibited for Buddhists. Ironically, these are important ingredients that are usually a part of beef and chicken pho. Since the original pho contains not just meat but also especially prohibited ingredients, beef or chicken pho are certainly prohibited in chay eating.

A major reconstruction of the staple Vietnamese food was necessary so that pho will be acceptable to Buddhists chay practitioners. With the vegetarian pho, this was made possible, and before vegetarian pho was made available to the public, it was already and still is very commonly served at the Buddhist temples. Because not all Buddhists strictly follow the vegetarian diet on a regular basis, you'll find vegans and pho chay in abundance during the many Buddist holidays throughout the year in both Vietnam and in the U.S.

For a guide on some Viet pronunciation including "pho chay," read my post on "Pronunciation of Pho and Other Vietnamese Words and Phrases."