How Best To Add Spices When Making Pho Broth?

It seems many people are a little confused about how to use the spices in making their own pho broth. Well here's a little help.

Reader Roy decided to make his own pho. He sent me several questions the other day. Here's one:

I have a question about the spices. When I simmer the broth for a long time (6-8 hours), when do I put the spices in the pot? Do they need to cook as long as the bones?

I did answer Roy, but left out a few important details. In this article, I want to provide a more complete take on using spices in making pho broth. Hopefully this will benefit other aspiring pho cooks as well. 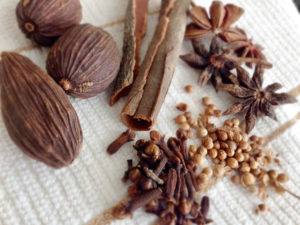 For basic type of questions, we need to start with the basics. First off, it should be pointed out that in order to start making a great pot of pho, one should possess

These elements are true for most dishes and are especially true for pho. If you are willing to invest the time and effort to make pho yourself, then you need both elements to achieve consistency, and consistency is what makes great pho. For first timers, just try it the first time, then learn and adjust to improve. There's no way around it.

Another important note: Unless you're an experienced pho cook, I don't recommend mixing up recipes. Usually questions like this one come to me without a recipe being shared. As a result, the discussion stays mostly general to apply to general cases. It's more important to understand the ideas behind it and then applying to your own recipe/situation, rather than to use it verbatim.

When it comes to spices, the longer you simmer, the more flavor you can extract into the broth. But this is true only up to a point, beyond which the broth can begin to taste unpleasant. Roy didn’t mention what his recipe calls for (what spice, how much, etc.), so here are some guidelines.

In general, there are 4 factors to consider when it comes to how long to simmer spices:

1. How much broth (how big a pot or yield) you’re making,
2. What spices and how much of each you’re using,
3. Whether you keep the spices whole or you grind them (see link below for more advanced tips like these), and
4. Personal taste.

For factor No. 4, some people prefer strong spice flavors, while others can’t stand too much of them. The best thing to do is to test. Even popular pho restaurants don't try to (and can't) please everyone. But what they can do is to please a lot of those everyone. If you're making pho at home, then it really is all about your personal taste, even when you say you want to make pho that tastes like so and so restaurant's.

Back to Roy's question. The answer is, without knowing what his recipe calls for, I’d suggest putting in the spices about 1/2 hour to an hour before the simmering is done. At the same time, watch (read: test taste) the pot like a hawk. Then for future pots, adjust to longer or shorter spice time as needed.

So there it is. I hope this helps clarify the proper use of pho spices. With practice and consistency, a great pot of pho can be achieved with just a few iterations.

For a more in-depth discussion and tips on pho spices, check out the post How Long To Cook Pho Spices In Pho Broth.